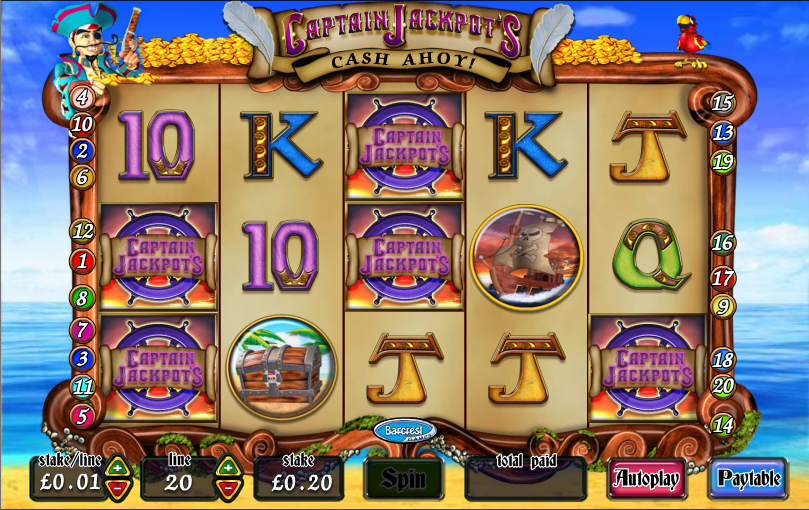 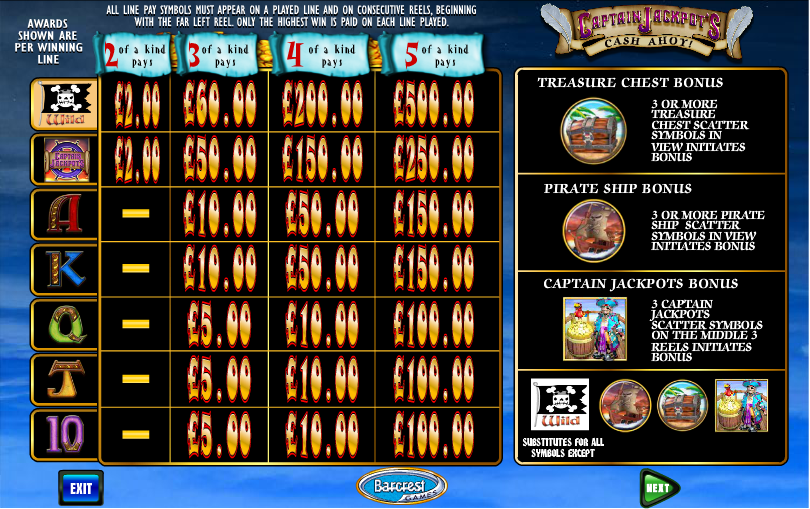 Barcrest are well known UK manufacturers of bricks and mortar fruit machines but some of those games also make the transition to the online world and that’s the case with Captain Jackpot, a slot machine with a scurvy pirate as the main character and three different bonus features to give you lots of money-winning chances.

Captain Jackpot’s is a five reel and twenty payline game and those reels are set in an ornate, wooden nautical frame with the captain himself in the top left hand corner. A parrot sits on the right and there’s a calm blue sea in the background.

Some piratey playing card symbols make up the lower values and there’s only one higher value which is the Captain Jackpot’s logo. Everything else is a bonus symbol and these include a skull and crossbones wild, a treasure chest, a pirate ship and then the captain and his parrot.

This seems to be the most commonly triggered feature and to get it you’ll need to land three or more of the treasure chest scatter symbols anywhere on the reels.

What happens next is that Captain Jackpot wanders across to a big treasure chest, hacks it open with his cutlass and then starts kicking it; each kick increase the bonus award.

Three pirate ship scatter symbols anywhere on the reels are what’s need to trigger this feature and when you manage it you’ll be asked to click on one of the ships in view. You will then be awarded a bonus based on the ship you chose.

To trigger this feature you need to land three of the captain scatter symbols on the middle three reels; you will then see a screen displaying a number of gold, silver and bronze pots revolving around the captain. When they stop, you will win the contents of the one at the bottom of the screen.

If you’re a low roller you will appreciate being able to play with minimum paylines here and still have the same chance of triggering one of the features.

This is a cheerful enough slot from a company which seems to have a decent grasp of what makes a good game. It looks good and sounds authentic and most players will appreciate the three bonus features.