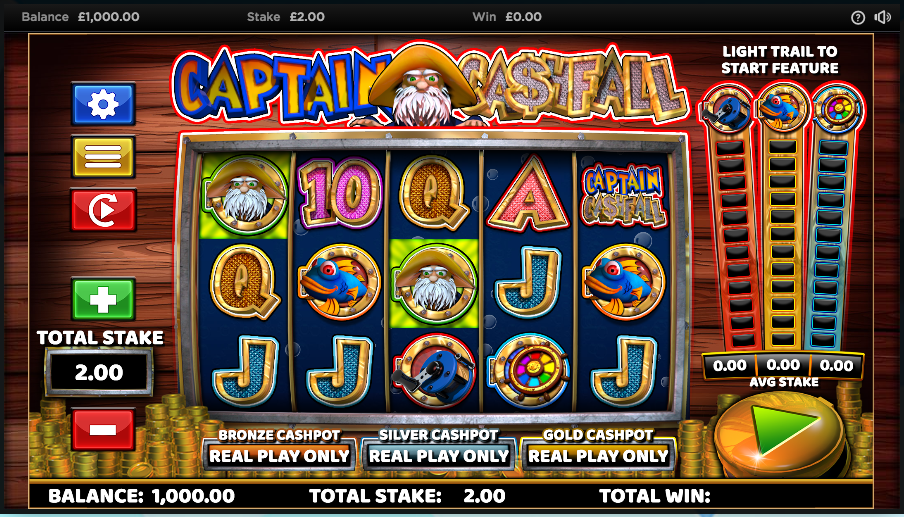 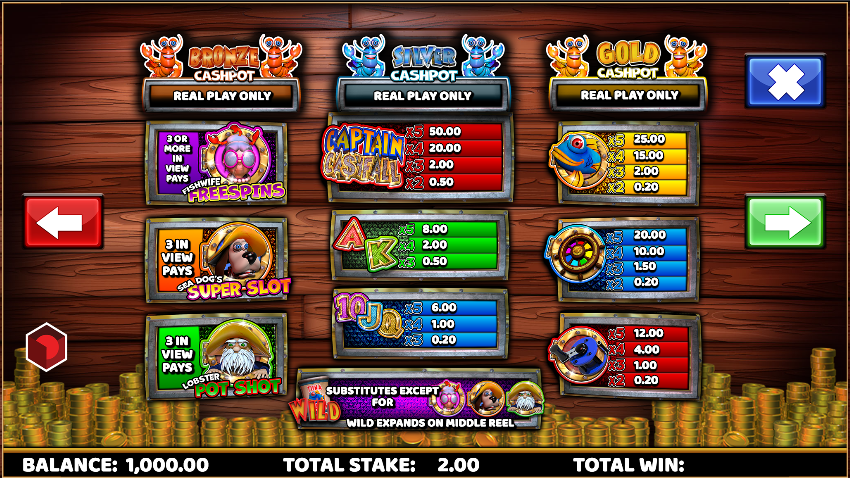 Life on the ocean waves is the theme of this online slot machine from Storm Gaming Technology and more specifically fishing; Captain Ca$hfall is the old sea-dog in charge of this craft and he has a wide variety of bonus features to offer as well as a progressive jackpot – read all about it below.

Captain Ca$hfall (note the dollar sign) is a five reel slot with three rows and twenty fixed paylines; the reels spin against the weatherworn wooden boards of this craft and on the right hand side there’s the feature trail which is explained in more detail below.

The high value symbols include the game’s logo, a blue fish, the ship’s multicoloured wheel and a fishing reel; 10, J, Q, K and A make up the lower values.

The wild symbol is a can of tuna which will substitute for all others to form winning combos except for the captain, the dog and the character with the pink sunglasses (the fishwife); in addition any wild on reel three will expand to fill all positions there.

This is triggered by landing three, four or five of the fishwife scatter symbols anywhere in view for which you will 10, 20 or 30 free spins respectively; during this round the middle position on reels two and four are locked wilds and it’s also possible to trigger more spins by landing more scatters.

Trigger this by landing three of the dog scatter symbols anywhere on reels two, three and four; now pick one of those symbols to determine whether you’ll receive 3, 5 or 10 free spins on the mini-slot. This is a three reeler which only contains different coloured dog symbols so wins are fairly easy to come by.

This is activated by landing three of the captain scatter symbols anywhere on reels one, three and five; your task now is to keep kicking the chest which will reveal red, yellow or blue lobsters, a cash prize or ‘Stop’. The coloured lobsters will increment their respective meters until three matching have been found at which point you win the jackpot associated with that colour. Any cash prizes are collected until you eventually hit ‘Stop’ at which point they are awarded and the round is over.

Some symbols are overlaid on to a particular colour and if the symbol and colour matches one of the trails, the meter is incremented one place. When a particular trail reaches the top that feature is awarded:

There’s lots to like about the Captain Ca$hfall slot – it’s loaded with bonus features and it comes with a progressive jackpot which seems reachable, even if it’s not really; the graphics a are fun rather than state of the art and there’s an RTP of 94.86%.