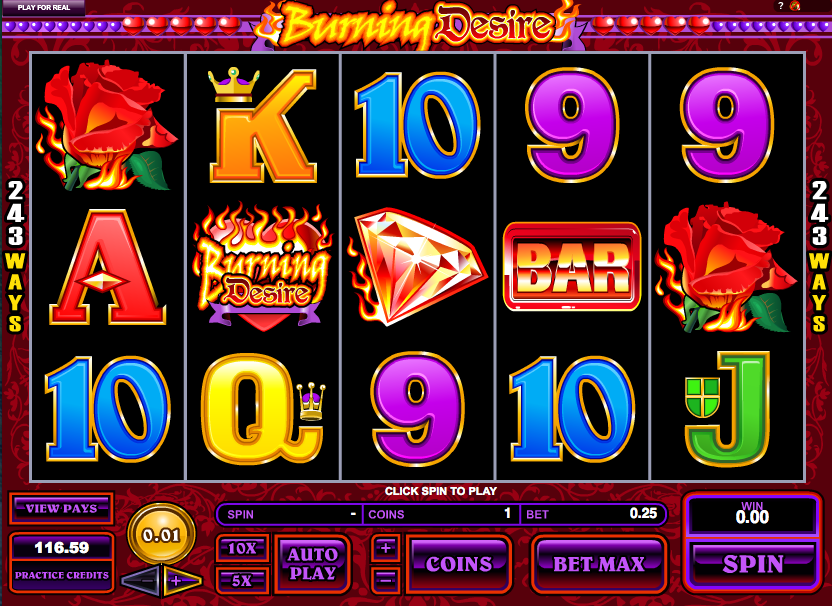 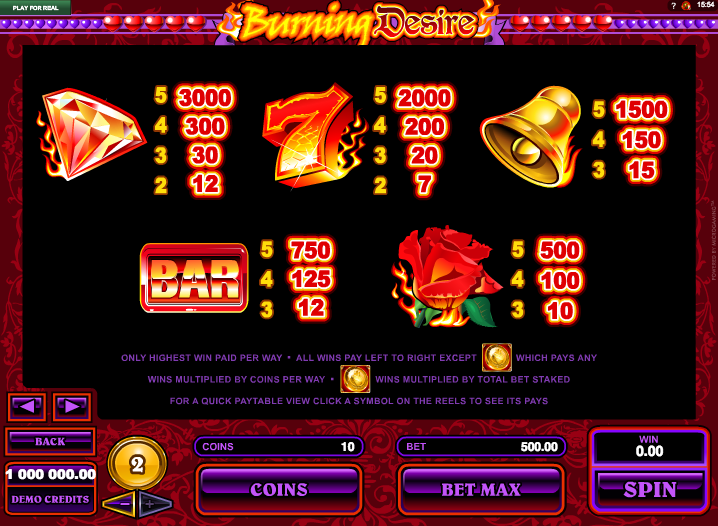 Valentine’s Day seems to come around almost annually these days and if it happens to be the time of year when it’s approaching, perhaps you should give this slot a go because there’s very little that’s more romantic than playing online slots on your own. Burning Desire is from Microgaming and while it looks to be pretty standard fare, there are couple of boys features which make it worth a go.

Burning Desire plays out over 243 paylines and five reels; in fact there are no standard paylines as such – all you need to do to land a win is match symbols in adjacent reels from left to right. Aside from the basic 9, 10, J, Q, K and A low value symbols, we have a range of either romantic or fiery ones for the higher values. These include burning roses, diamonds, bells, and sevens and there’s also a red hot Bar.

The wild is a burning heart with the games’s logo printed on top and it only appears on reels two and four; there’s also a gold coin emblazoned with a heart which acts as the scatter symbol.

This is Burning Desire’s main feature and it’s triggered by landing three, four or five of the gold coin scatters anywhere on the reels. For this you will receive 15 funky free spins and all wins during this feature will be tripled.

Three or more scatters landed during the feature will win you 15 more spins.

If you’d like to wager your most recent win, just click the ‘Gamble’ button underneath the reels. Now you can try to double or quadruple that amount by picking the correct colour or suit of the next playing card drawn. Make a wrong choice and you’ll lose it all.

Be careful when playing the gamble feature, repeated attempts to double up will almost certainly end in failure; only gamble every now and then and don’t try to get more than one or two wins in a row.

Theres a certain lack of imagination about this slot and if you’re familiar with similar Microgaming releases there’s really not much new here. Try it for a bit but there are better options available.