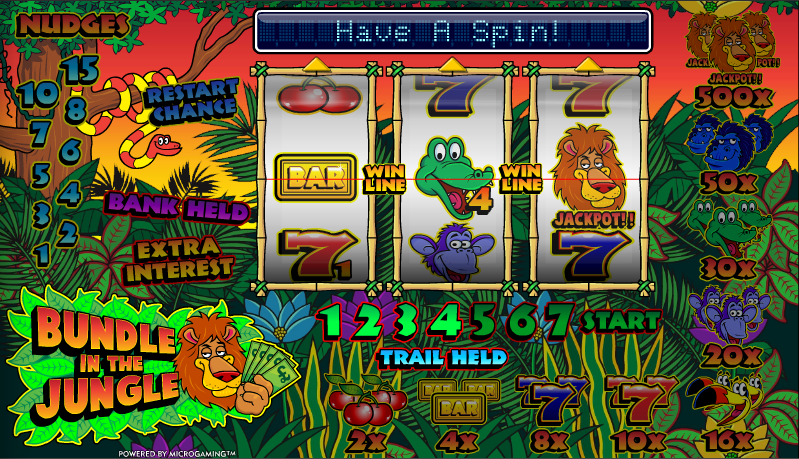 Bundle in the Jungle is one of those fruit machine-style slots of which we are particular fans; Microgaming seems to have cornered the market in producing this type of game and this particular example is jungle-themed. There are loads of base game bonus features here and an entertaining main feature to win you the big money.

Bundle in the Jungle is a three reel slot with a single payline and the background scenery is a riot of lush undergrowth underneath a red and orange sky. There are some traditional symbols – cherries, bars, sevens – at the lower value end and some cheerful cartoon animals at the top including parrots, monkeys, crocodiles, gorillas and lions. The lion is worth 500x your total bet if you can land three on the payline.

This is the main feature and to trigger it you will need to light up all the trail numbers and the ‘Start’ position below the reels to kick it off. The numbers are attached to some of the symbols and will fill up the trail when they land on the payline.

You will now be transferred to the feature screen which you can see in the video below. You begin in the bottom left hand corner and use the Hi/Lo gamble button to work your way up; a successful spin will move you either one pace sideways or upwards. Lose and it’s all over. Prizes available include nudges, multipliers, Winspins and specials such as the Bundle in the Jungle prize.

You will be randomly awarded these bonuses in the base game and the nudges will allow you to jog down single reels to try and make winning combos and collect trail numbers. Nudge awards may also be repeated or banked if you get lucky.

Holds allow you to freeze certain reels when given the chance; they’re important in this game because they allow the player to hold reels with active trail numbers.

This may be awarded after any non-winning spin; you will see it coming in the notice board above the reels and it will spin a guaranteed win for you.

Dome of the symbols on the reels also contain a ‘Bonus’ addition and if you land one of these on the payline you will win one of the following extras:

We always like to go for the trail numbers in this type of game so when nudging or holding, pay particular focus to the numbers on the reels rather than trying to make a matching set of symbols. Also look out for Reel Bonus symbols when nudging.

We love this style of slot; there’s loads of bonus features and the always fun number trail. Add a jungle-themed soundtrack and you have a winner.