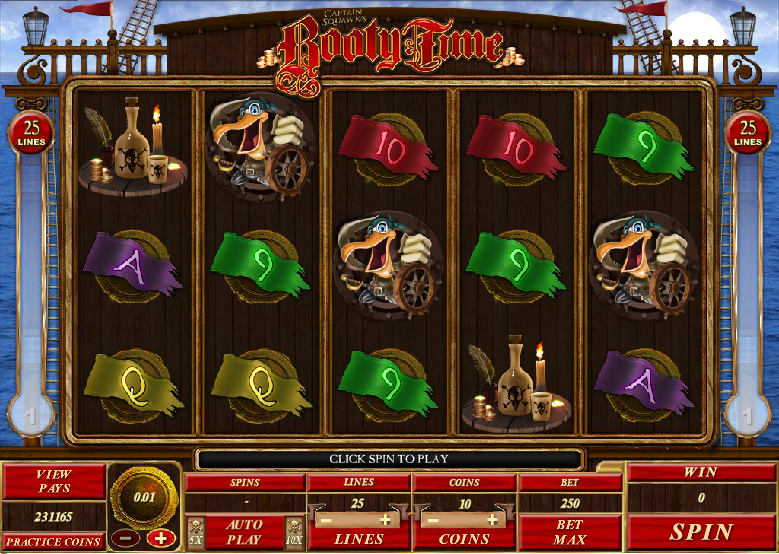 The title Booty Time  might justifiably put you in mind of a jaunty tune from Beyonce Knowles but this online slot from Microgaming has pirates as it’s theme and the booty of the title refers to a sea-dogs treasure trove.  Booty Time adds to a pirate genre which already contains some pretty decent games.

The long title of this slot is Captain Squawk’s Booty Time  and it’s a five reel and twenty five payline game set on the deck of a pirate ship with a calm seas and a gentle breeze making the red flags flutter.

You may already have guessed that Captain Squawk is a parrot and there are plenty of other pirate-related symbols including some skull and crossbones grog, Squawk firing a cannon, Squawk at the wheel and Squawk smoking what looks suspiciously like marijuana.

Bonus symbols include a Booty Time wild and a treasure chest scatter which activates the free spins.

Booty Time features just the one bonus feature and you can activate it by landing three of the treasure chest scatter symbols anywhere on reels one, three and five.  Your basic award is three free spins with a 2x multiplier.

You will now be prompted to pick one of the gold coins on the reels and this will reveal a number; on the next screen you’ll see several treasure chests and you must pick chests until you reach the number specified by the gold coin.

Each treasure chest will reward you with either a certain amount of free spins or multipliers and when the picking is finished, the free spins will begin as you can see from the video below.

Not only does the Booty Time wild help out with substituting for symbols and creating winning combos, it also multiplies those wins by two, which is handy.

While there’s nothing ground-breaking about this slot it’s an enjoyable trip onto a pirate ship and there’s a nice bonus feature.  The music should also be experienced and it’s a relaxing guitar soundtrack which is the perfect accompaniment to life on the ocean waves.