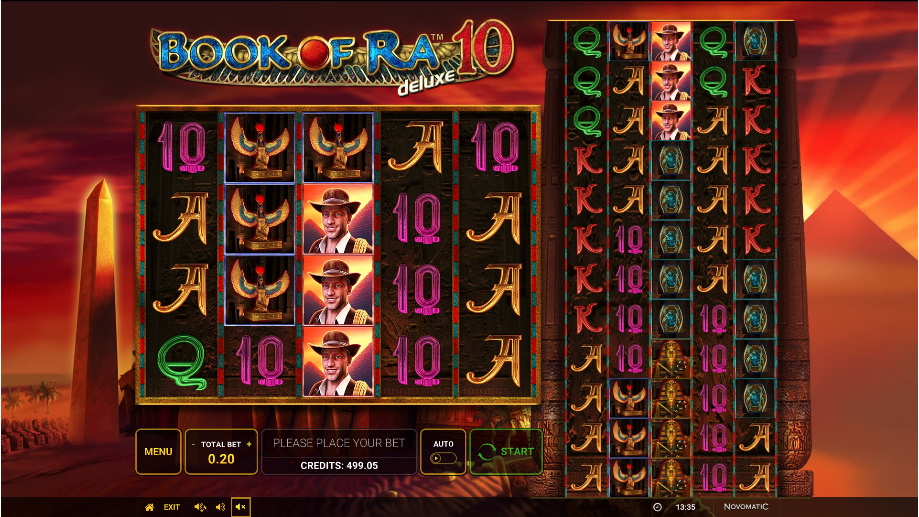 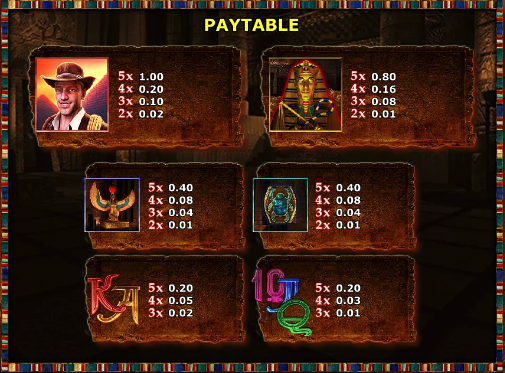 Novomatic’s Book Of Ra franchise is one of the most enduring sets of online slot machines around and looking at the title of Book Of Ra Deluxe 10 you may be forgiven for thinking we’re at version number ten; in fact ‘ten’ refers to the number of reels in use although we’d regard this game more accurately as two five reel slots.

Book Of Ra Deluxe 10 is a five reel slot with two sets of reels and a total of one hundred paylines – there are four rows on the left set and twelve rows on the right. The Egyptian theme is complemented by the sun rising over the pyramids in the background.

The high value symbols include the intrepid explorer, the sarcophagus and representation of two gods; 10, J, Q, K and A are the lower values.

The coin engraved with Bastet is wild and it will replace all standard symbols to help form winning matches; the Book of Ra is the scatter symbol.

Landing a full stack of wild symbol on the left hand side will copy those wilds across to the corresponding reel on the right hand set.

Trigger this by landing three, four or five of the Book of Ra scatter symbols anywhere on reels one, three and five on either/both reel sets and your reward will be 8, 12 or 20 free spins respectively.

Before the round starts a symbol will be selected at random and if it appears on the left hand reel set it will transfer over to the corresponding position on the right hand side – it will also pay out on active paylines even if the symbols aren’t on adjacent reels.

There’s not really much new in Book Of Ra Deluxe 10 – the theme obviously comes with the series but we’ve seen this ‘two reel set’ configuration with moving wilds a number of times before (Push Gaming’s Apollo: God Of The Sun for example)  If you’re a fan of this series then have a try but if not then don’t stay for too long.