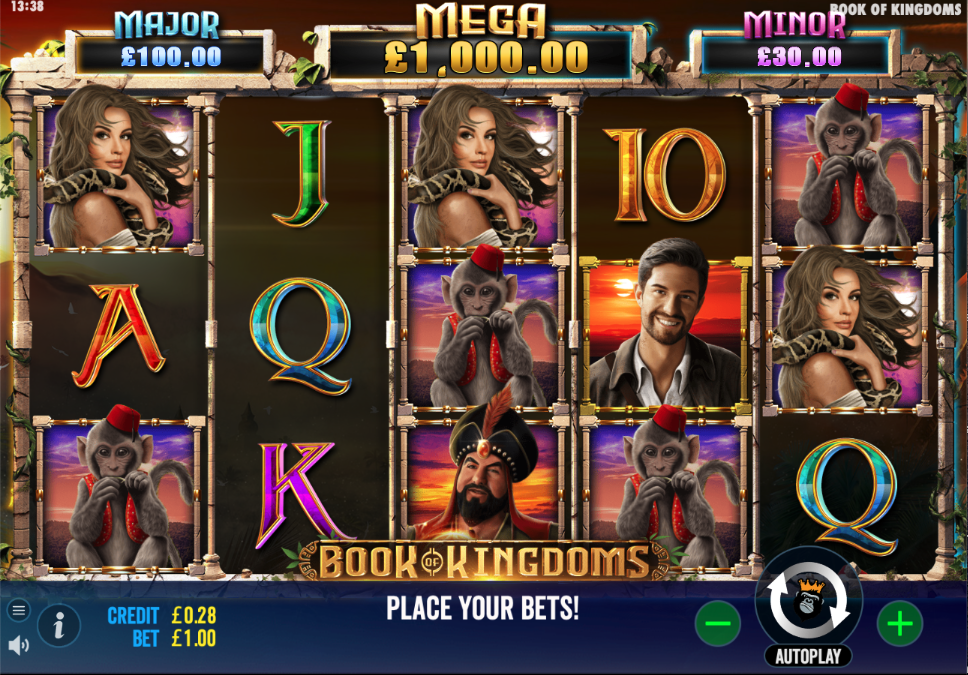 Deep in some South American jungle lies a mystical tome known as the Book of Kingdoms and in this online slot machine of the same name we follow the adventures of grave-robbers treasure hunters as they search for this object; it’s developed by Pragmatic Play and from £0.25 per spin it tempts players with free spins and the Money Respin feature with jackpot prizes.

Book of Kingdoms is a five reel slot with three rows and twenty five fixed paylines; those familiar temples emerge from the jungle behind those reels as the sun sets over the distant mountains.

The four theme-related symbols are all characters from this story – three humans and one monkey – while the lower values are the standard 10, J, Q, K and A; the book is both the wild and the bonus symbol and it will replace all standard symbols.

Landing at least three of the book bonus symbols anywhere in view will award five free spins with five more available during this round if you can land three more.

Before the spins start one standard symbol will be selected to expand when it appears, covering all positions on its reel – this symbol doesn’t have to be on adjacent reels to payout as long as there are at least three on a paylines.

The silver coins always land with a cash value attached and when five coins appear in one spin the Money Respins are activated; those triggering coins lock in place and you’ll get three respins to lock more – each time more land the spins are reset to three again.

If a gold coin lands it will award the total of all values already there and if you’re lucky you may see coins with the Minor (30x), Major (100x) or Mega (1000x) jackpots attached.

The round is over when no coins land for three successive spins or all positions are full at which point you’ll receive all the value shown.

Book of Kingdoms joins a large genre of treasure hunting slots but it’s entertaining enough to be one of the better ones we’ve tried for a while; regular players will be familiar with both features but that’s Ok because there’s some big wins available when you trigger them.