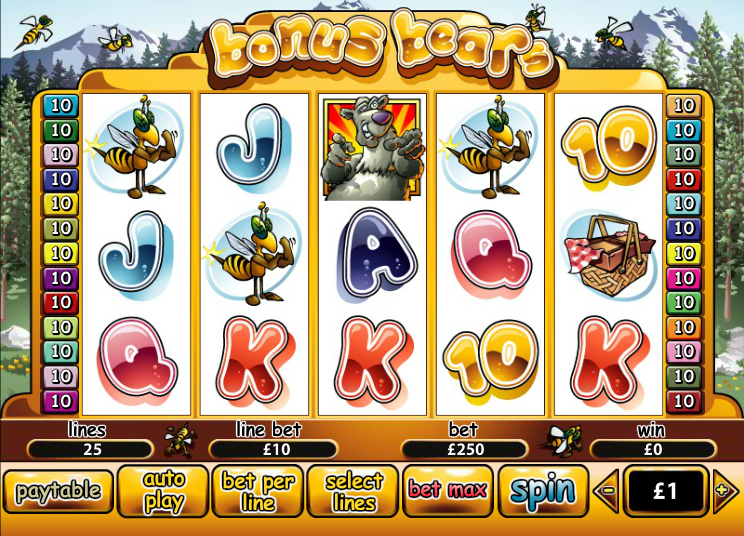 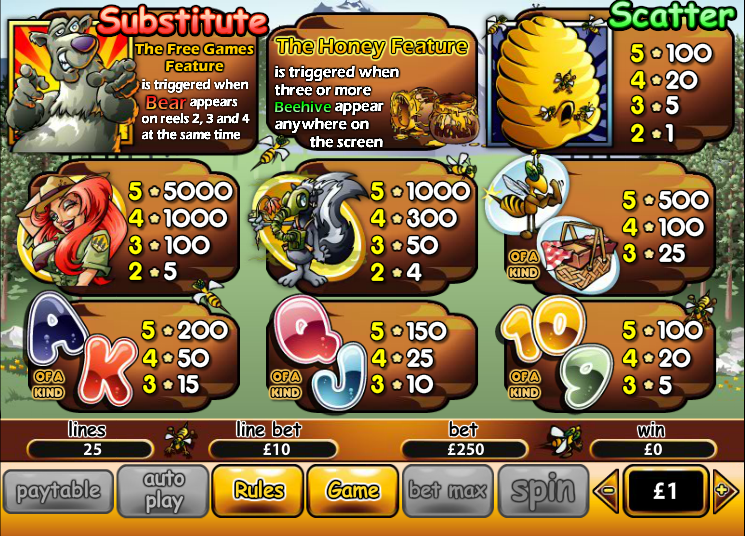 It’s time to visit the wide open spaces of a national park as we check out this online slot machine from Playtech; our hosts for this trip are the Bonus Bears and they will be our guides to the various characters and bonus feature making an appearance. Read the full review below for more information.

Bonus Bears is a five reel slot with three rows and up to twenty five paylines; there’s a hint of Yogi Bear about this game and it all takes place against a scenic landscape of meadows, trees and lofty, snow-capped mountain peaks. Wasps buzz around the honey-coloured reels.

The high value symbols include a red-haired park ranger, a skunk with a gas mask, a wasp and a picnic basket; 9, 10, J, Q and K make up the lower values.

The bear himself is the wild symbol and he also activates one of the features; the beehive is the scatter which is the key to the other bonus game. The wild bear only appears on reels two, three and four and will substitute for everything except the scatter.

This is triggered by landing the bear anywhere on reels two, three and four on the same spin; you will now receive 15 free spins with the extra bonus that all prizes are subject to a 3x multiplier. Additionally it’s possible to earn more spins by landing three more bears during this round and the Honey Feature can be triggered from here.

Trigger this bonus game by landing three or more of the beehive scatter symbols anywhere in view; you will now get to play a game in which you must select trees for the bear to climb. He will find either a honey pot which awards a prize or a beehive which ends the round. Finding the beehive will award a small final bonus of 2x the total stake.

Bonus Bears is a colourful and cheerful slot and we had fun playing it; it’s not too difficult to trigger the bonus feature and there’s an RTP of 95.17%.