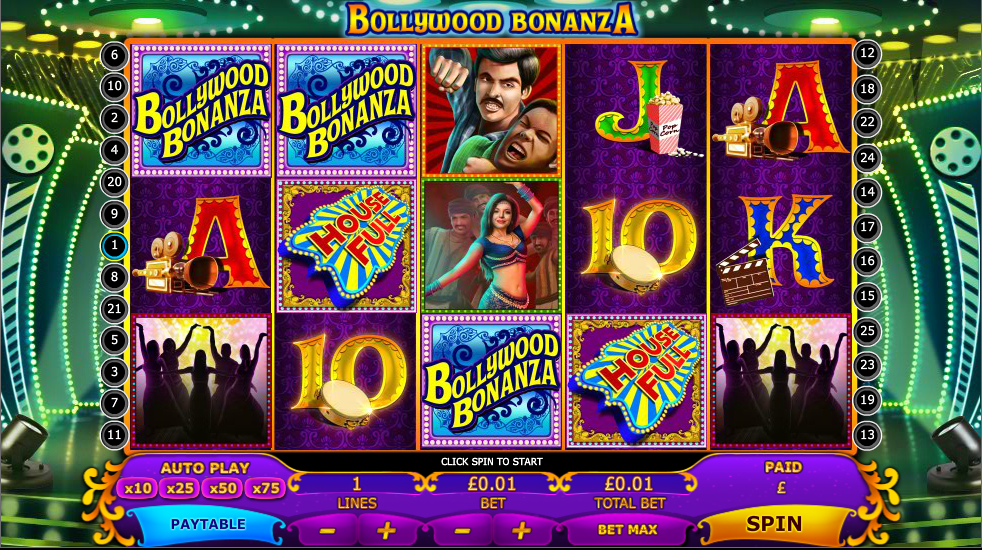 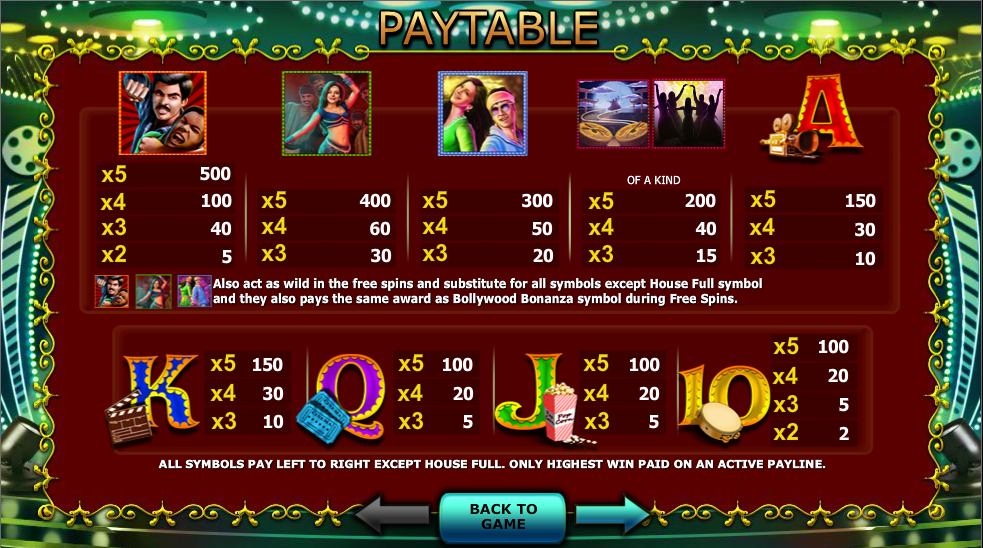 Slots players are of course well-informed enough to know all about Bollywood and how the Mumbai film industry churns out huge numbers of movies for domestic consumption and for the Indian diaspora in general. This brand new online slot from Random Logic uses that theme to inject some colour and light onto the reels and we expect a top notch soundtrack; read on to find out more.

Bollywood Bonanza has five reels and twenty five paylines and those bright reels are set against the backdrop of a glowing green stage, illuminated by spotlights and bulbs and clearly ready for one more choreographed dance number.

The main symbols include silhouetted dancing girls, a full moon, a stereotypical leading couple, a single dancing girl and two men fighting. Lower values are the standard 10, J, Q, K and A but each adorned with a movie-themed accessory such as popcorn, a clapperboard or a film camera.

The wild is represented by a ‘Bollywood Bonanza’ symbol and there’s a ‘House Full’ icon which is the key to the main feature. The wild is the highest paying symbol and worth 750x the line bet for five on an active payline.

The House Full symbol is what you need to land here and three, four or five anywhere on the reels will win you eight free spins plus the associated scatter payout.

There’s no extra multiplier here but during the spins the three character symbols (hero, heroine and villain according to the paytable) will all act as wilds which should help players out considerably. They also pay the same as the wild in the base game.

More spins can be triggered from within this feature by landing three or more scatters once more.

It’s possible to play with stakes of just £0.01 here if you just want to trigger the feature; it’s activated by scatter symbols which don’t need to appear on an active payline.

Well the good news is that the sound effects are what you’d expect from a musical-themed slot such as this; otherwise this is fairly run-of-the-mill game but worth playing nonetheless. A Bollywood-themed game is a first for us.