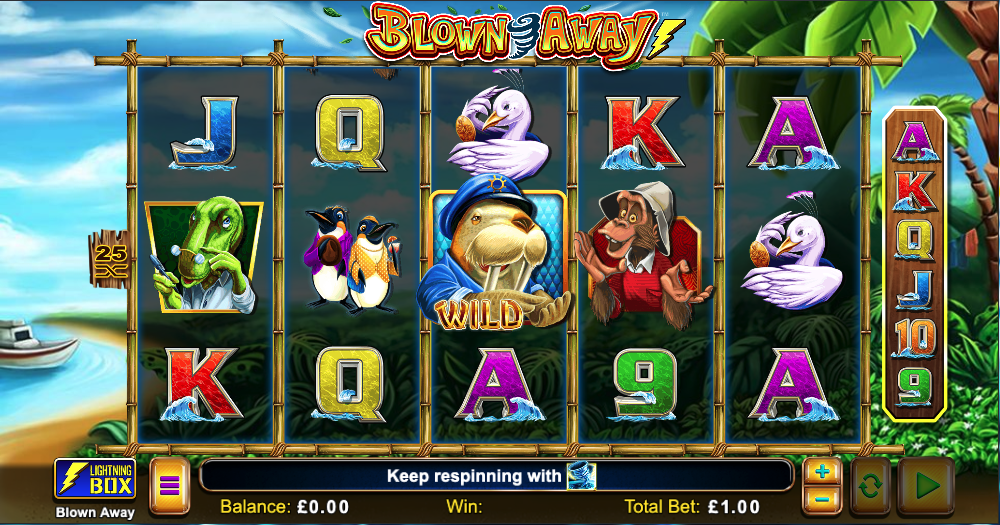 There’s a storm coming and directly in its path are a group of animals who are the characters in this online slot machine developed by Lightning Box; it’s called Blown Away and it offers players free spins and tornado respins.

Blown Away is a five reel slot with three rows and twenty five fixed paylines; the setting is some tropical island on which those reels spin within a bamboo frame against a backdrop of sandy beaches, moored boats and palm trees.

High value symbols include the monkey, the lizard, the white bird and the penguins; 9, 10, J, Q, K and A represent the lower values. The walrus captain is wild and he’ll substitute for all symbols except the boat and the tornado to help form winning combinations.

The tornado symbol is also a wild, appears only on reel five and when it does it will trigger this feature; you’ll now receive a respin with the lowest value symbol removed from the reels. Another tornado landing will repeat the process.

This is triggered by landing at least three of the boat scatter symbols anywhere in view for which you’ll receive ten free spins; the ideal situation is to trigger the Tornado Respins during this feature because whenever the tornado lands it might drag a cow away with its force, increasing the multiplier for any wins by 1x up to a maximum of 7x. It’s also possible the cows might run off and you won’t increase the multiplier. It’s also not possible to trigger any more spins from within this round.

Blown Away is a cheerful-enough slot with an interesting feature in the Tornado Respins especially; it’s designed to a high quality with some big wins if you can catch those cows.