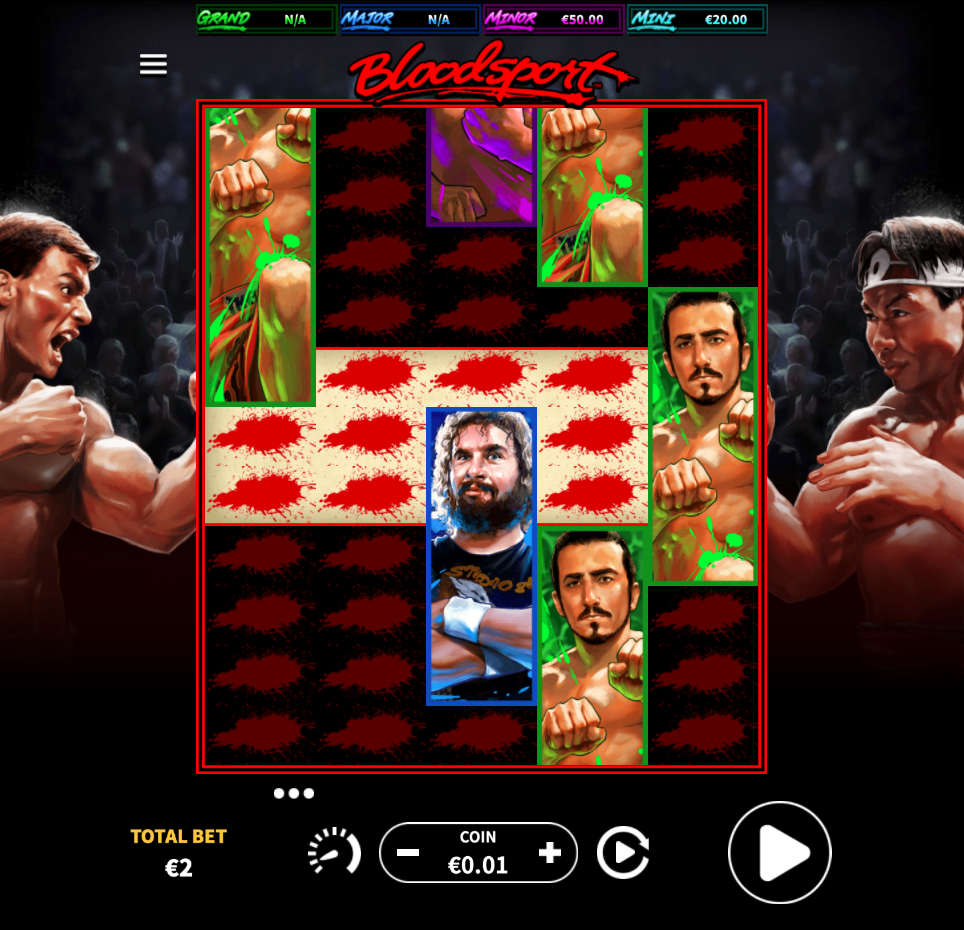 Jean-Claude Van Damme was one of the premier martial arts action heroes of the 1980s and 1990s; Bloodsport was one of his iconic films and this tale of a fight-to-the-death tournament in Hong Kong has now made it to the spinning reels in this online slot from Skywind which tempts players which loads of themed bonus features and two progressive jackpots.

Bloodsport is a five reel slot with eleven rows and eighty eight fixed paylines; behind those lofty reels Frank Dux (Van Damme) faces off against Chong Li (Bolo Yeung). Rows five, six and seven (where the lit up blood spatters are) is the ‘Fight Zone’.

The five standard symbols are all the main characters from the movie including Li, Pumola, Sadio Hossein, Paco and Ray Jackson; Frank Dux is wild, the blood spatter and the Dim Mak are the scatter symbols.

Landing at least three of the Dim Mak scatter symbols anywhere in view will award this picking game in which you can work your way up through three levels with maximum prizes of 1500x the stake in level one, 2500x in level two and 5000x in level three. ‘Advance’ will move out to the next level and ‘Exit’ ends the round.

This is triggered by landing fifteen blood spatters in the Fight Zone or by reaching the end of the Dim Mak bonus successfully; you’ll now get to spin the Big Time Fight Wheel which will award one of the following features:

A close inspection of the paytable will reveal that there’s an optimal strategy for playing the Dux Bucks feature:

Bloodsport is great fun and a excellent tribute to JCVD and his action movies which kept us entertained when we were younger; the characters will be instantly recognisable to any fans of the movie and this only adds to the enjoyment of a slot which promises so much in the way of features and prizes.