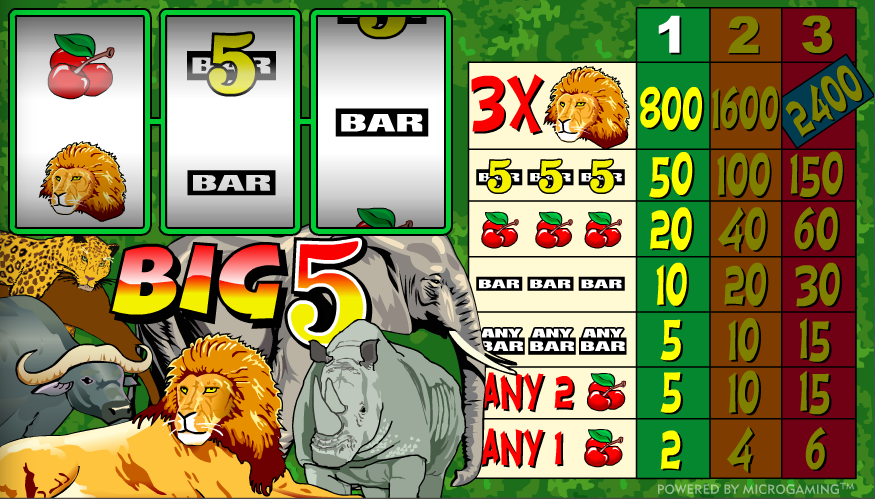 As online slots fans we have made many virtual trips to the vast and wild savannahs of Africa; there we have played numerous games featuring a veritable cornucopia of the continent’s noble animals. This time it’s Microgaming’s turn to join us on that voyage of discovery with Big 5. Big 5 originally referred to the animals most wanted by hunters but now it’s more of a marketing term – “Visit The Serengeti! See The Big Five!”. The animals involved are the lion, elephant, buffalo, leopard and rhinoceros.

Big 5 is a classic slot with three reels and one payline and there’s a nice grouping of the five animals underneath the reels. We have some doubts about whether these animals usually hang around together, drinking out of the same lakes and talking about the footie but they are nonetheless.

The symbols aren’t particularly imaginative – they include cherries, bars, bars/fives and then the lion himself, or rather his head. He’s the most valuable symbol and worth 2400x your stake for three on the payline.

There are a couple of ways to win apart from getting three matching symbols and these are:

The first thing you need to do is pick your stake by using the ‘+’ and ‘-‘ buttons underneath the reels and that will provide a basic wager of £0.25 – £5.00. You can then choose a coin level between one and three which will double of triple that original wager so you now have a betting range of £0.25 to £15.00.

Some Microgaming slots have a financial incentive to use all three coins but Big 5 does not; therefore it’s up to you to pick your stake but the prizes will be proportionately the same.

We like animals but this is certainly not the most compelling safari-themed game we’ve ever played. The graphics are bit too basic and there’s no incentive for the higher rollers. Not much to see here really.