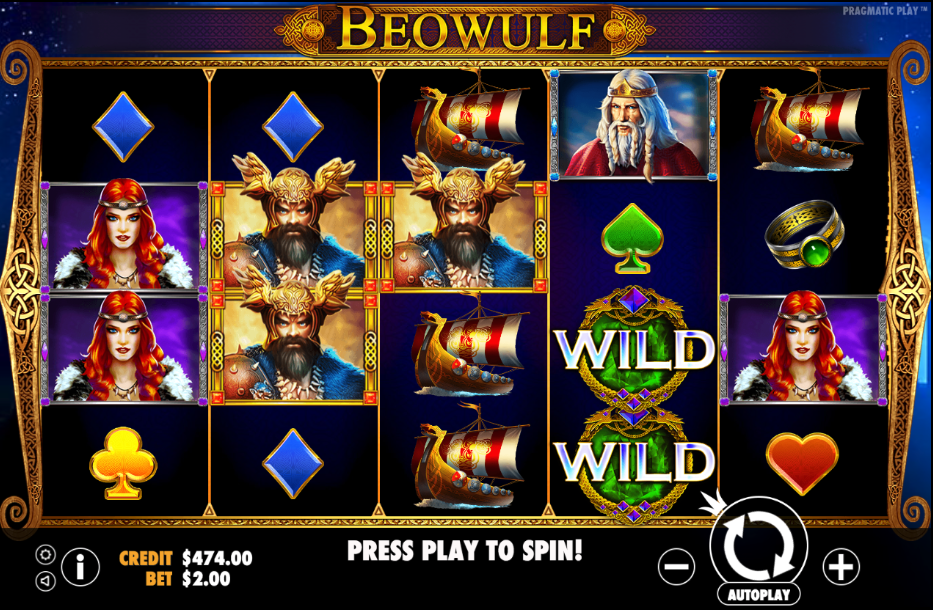 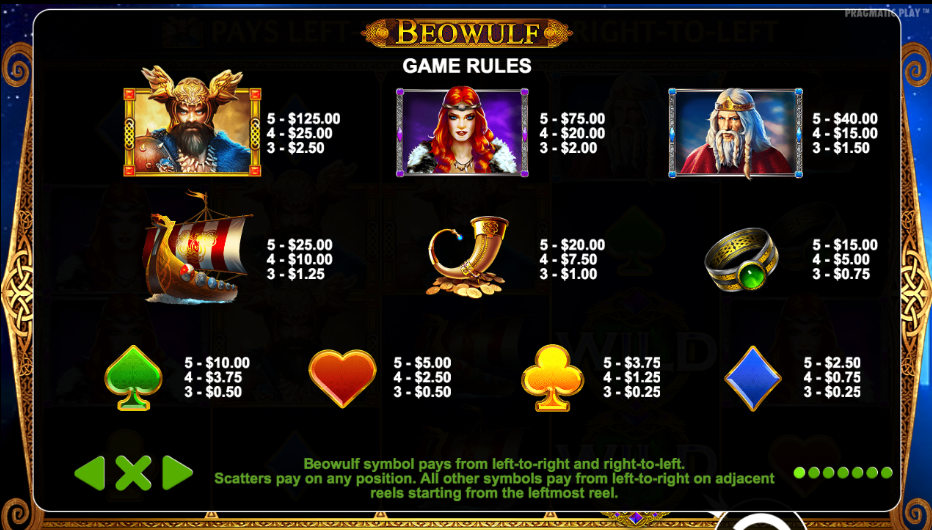 Commonly regarded as the oldest poem in the Old English language, Beowulf dates from at least 1000 years ago and relates the story of the eponymous hero who travels to the aid of King Hrothgar to help rid him of the monster Grendel and his mother. Pragmatic Play have turned it into an online slot and you can find out all about it below.

Beowulf is a five reel slot with four rows and forty fixed paylines; those reels spin within a golden frame inlaid with patterns which are reminiscent of Celts and Saxons.

The high value symbols are King Hrothgar and his wife, a longship, a battle horn and a green jewelled ring; playing card symbols of green, red, yellow and blue make up the lower values.

The wild symbol is a green gem encrusted with gold and it will replace all others to help form winning matches except for the sword/shield scatter. Beowulf is a special symbol with his own feature and he also pays from right to left as well as left to right.

If you can land a stack of Beowulf symbols on reel one you’ll trigger the Beowulf respins; the award is three respins on a set of reels which contain only Beowulfs and blanks. All Beowulfs which land will remain in place and they will also add one more spin – when no more land the reels will be evaluated for payouts, not forgetting that he pays in both directions. All reels filled will pay 10000x the line stake.

This is triggered by landing three, four or five of the sword/shield scatter symbols anywhere in view for which you will receive 10, 15 or 20 free spins respectively. There are no extra features or multipliers in this round but unlimited extra spins can be won by landing three more scatters.

We always like a slot with some historical context and Beowulf has plenty of that – it follows the design of other Pragmatic Play games but that doesn’t matter because it’s engaging, atmospheric and fast moving. It comes with an RTP of 96.66%. If you like the theme then why not also try Beowulf by Quickspin.