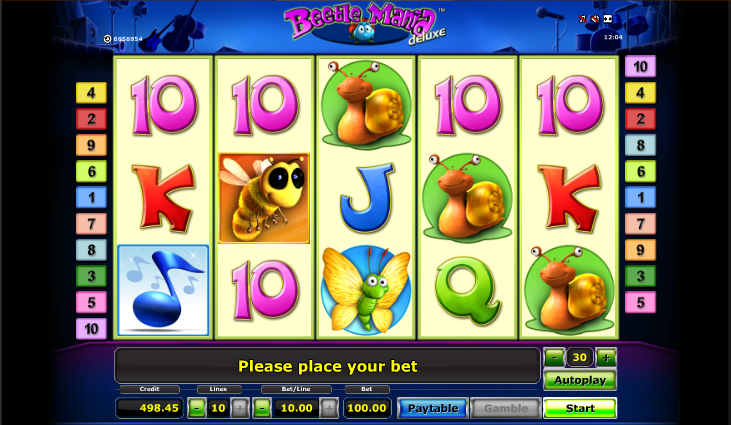 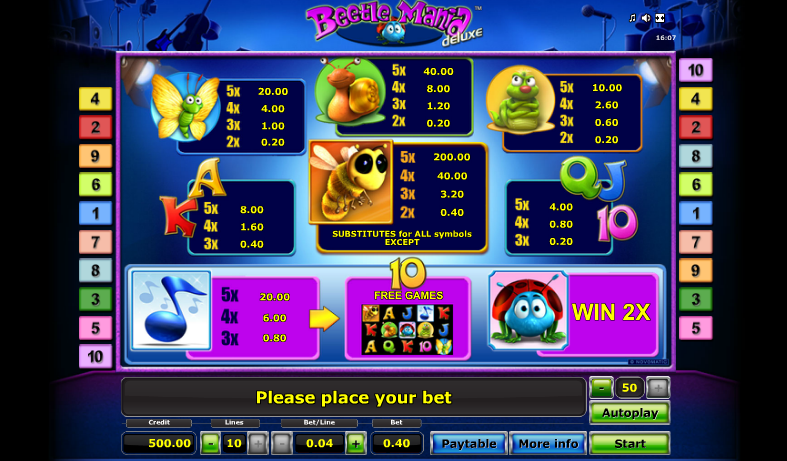 Novomatic games are well known for their simplicity and clean lines and Beetle Mania Deluxe is no exception; it’s the online version of the land based slot which has been enduringly popular since it’s release. Beetle Mania refers of course to the insect who is the main character and also pays tribute to the Fab Four, Liverpool’s finest export.

Beetle Mania Deluxe has some superb graphics and is played out over five reels and just ten paylines. It has the typical look of a Novomatic game which some players may find a little boring but there’s a certain consistency here and you always know what you’re getting.

Apart from the low value playing cards symbols there are a range of cute characters to brighten your day and these include a cheerful bumblebee, a grumpy worm, a smiling snail and a happy butterfly who is also the wild symbol.

There’s a blue musical note as the scatter and during the feature there’s also a ladybird who adds a little extra as we shall explain below.

Ten free spins are the order of the day here and to earn them you’ll need to land three, four or five of the musical note scatter symbols anywhere on the reels.

You can kick things off by pressing the ‘Start’ button and this is where the ladybird comes in handy – if it lands on the centre reel during the spins you will receive a prize equal to the amount you have already won during the feature (up to a limit of 100,000x your line bet). Obviously it’s best if the ladybird lands towards the end of the spins but it’s all pot luck.

We’ve not much to add here, as with most Novomatic games but low rollers can play with tiny stakes and still have the same chance of triggering the feature because it’s activated by scatter symbols.

It’s certainly basic but it looks and sounds really nice and there’s always a place for high quality slots. The ladybird feature adds a little welcome extra to proceedings.