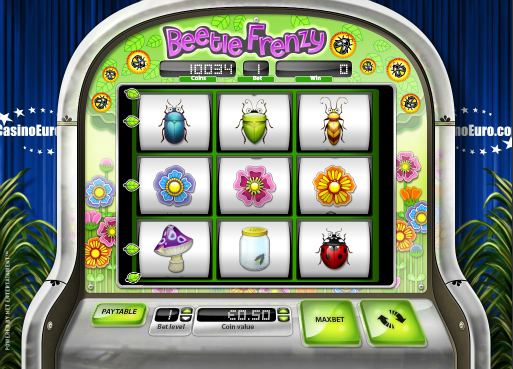 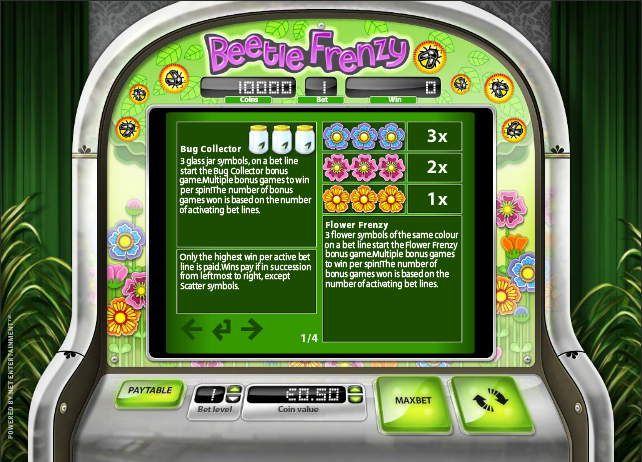 Here at the slots guru we tend to veer towards the more complex online slot machines; we like five reels, loads of paylines and in particular we like a creative bonus game.  There’s no escaping the fact though that many people don’t need all that extra stuff.

Many slot machines are still three reel, single payline games and lots of people still prefer to play their slots that way.  Beetle Frenzy from Net Entertainment is something in the middle of the two extremes and it looks fantastic; it’s bright, cheery and even the sounds will cheer you up on a rainy day.

Unlike most of the basic three reel slots, Beetle Frenzy does have some bonus games which came as a pleasant surprise to us.

If you can land three glass collector’s jars on a payline you’ll trigger the Bg Collector game and this is a simple pick-the-jar affair in which you are shown a screen with nine jars.  Your task is to pick them, each one revealing a corresponding cash prize, until you uncover the big black cross which ends the game.

This is a slightly more involved bonus game and is triggered by landing three flowers of the same colour on a payline.  The screen then changes to one in which there’s a 2 x 2 reel surrounded with a chain of symbols.  Each time you press ‘spin’ the reels reveal four symbols, each one worth a certain cash prize; a light then travels around the chain of symbols on the outside and if it stops on one matching what’s on the reels, a multiplier is applied.

Beetle Frenzy is a cheerful and colourful diversion which adds a bit of life to the three reel slots genre.  The five paylines are fixed with a minimum wager of €0.10 and a maximum of €5.00 per spin.