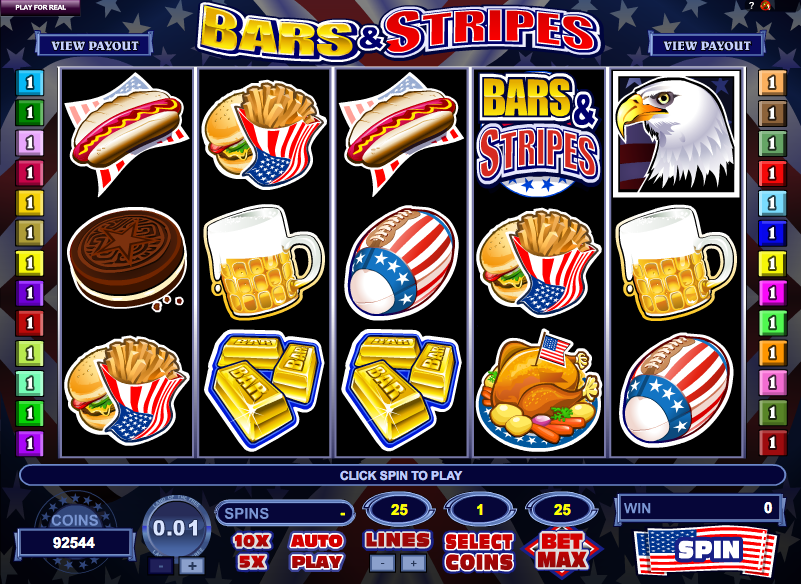 If you’re a lover of Americana then Bars and Stripes may be the thing for you; if you’re an online slots fan then you’re really in luck because this Microgaming have designed this game just for you. We say Americana but really it’s all about the food with the odd Statue of Liberty thrown in for good measure.

Bars and Stripes is certainly colourful and plays out over five reels and twenty five paylines. There’s no doubt what the theme of this game is even if you didn’t know the title – half of the symbols feature the flag of the United States of America and there’s a giant Stars and Stripes filling up the background.

Let’s get to to those foodie symbols then and we have a chocolate biscuit, a glass of beer, a hot dog, burger and fries, an apple pie and a turkey – all the things necessary to keep the United States a world leader in obesity. Non-food symbols are gold bars, a seven, a flag, the Statue if Liberty and a Bald Eagle.

Bonus symbols are Uncle Sam’s hat, the Bars and Stripes logo wild and an American football scatter of which just two will win you double your total bet.

Rather disappointingly this is the only bonus game available; you can trigger it by landing three, four or five of the hat scatter symbols anywhere on the reels and what you’ll get to do is pick one of those hats for a bonus win. You will get the following number of picks:

That’s it and it’s all over pretty quickly.

Not too much to offer here but of course you can trigger the hat bonus with the scatter symbols so low rollers will appreciate the chance to play with tiny stakes and just one payline.

A lack of an entertaining bonus feature is a bit of a problem here; even some free spins might have been better than what’s available. Many players strive towards that bonus feature and for to be over so quickly is disappointing. There are some nice graphics and sound effects though.