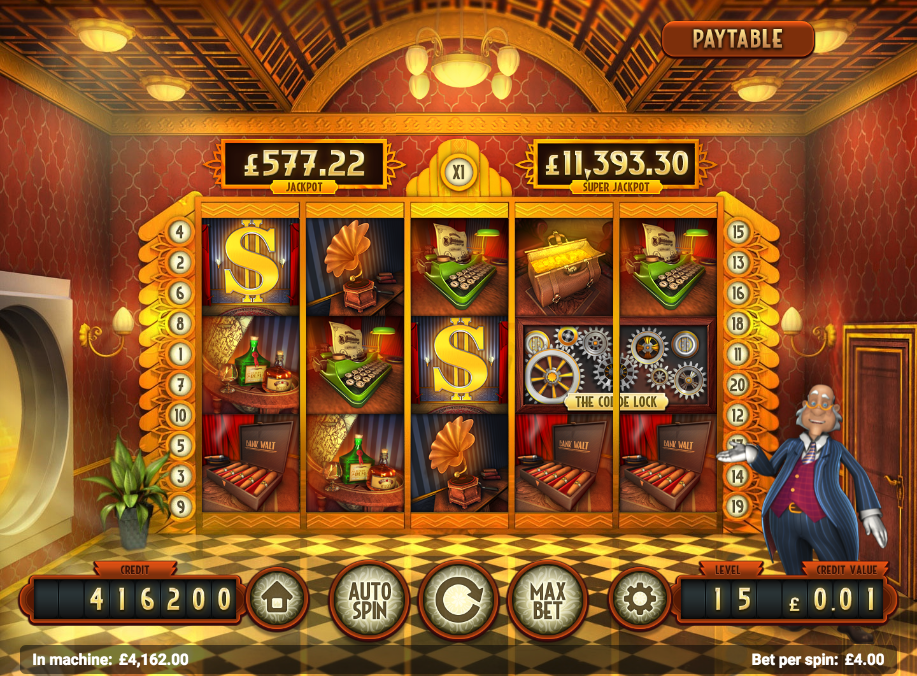 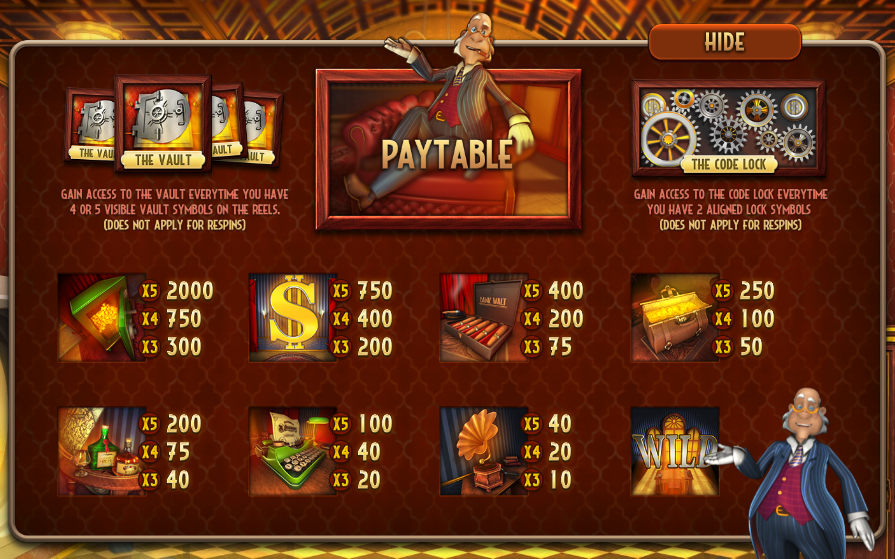 There once was a time when your bank manager knew your name and would happily escort you down to the bank vault to withdraw some money; Bank Walt is an online slot from Magnet Gaming which harks back to that pre-war era and supplies us with various in-depth bonus and a progressive jackpot.

Bank Walt is a five reel slot with three rows and twenty fixed paylines; the arched, ornate bank vault is where those reels spin while Walt watches over proceedings from the right hand side.

All the symbols are related to the theme and include the safe, the dollar sign, the posh humidor, the case of gold, the expensive liquors, the typewriter and the phonograph.

The wild is a big ‘Wild’ which appears only on reel three and which will substitute for all others to help form winning combos except for the vault and code lock bonus symbols.

Any base game win will award a free respin of the centre reel with all other reels held in place; the multiplier will increase for any further wins which will also award another spin.

This is triggered by landing at least four vault bonus symbols anywhere in view; you’ll now get to play a picking game in which you unlock deposit boxes starting from the left hand side for prizes. Open five boxes in the first two columns, four in the next two and three in the final one.

Finding a green arrow will increase the values in the Bank Flash area on the right and one of these prizes will be awarded at the end; finding coins inside boxes will increment the spaces below the boxes and when these are full the wheel will spin to award entry into the Jackpot Flash/Super Jackpot Flash games or a cash prize.

Trigger this by landing the two halves of the code lock symbol next to each other on reels four and five; you now get to try and open the lock in nine dice rolls, working your way into the centre for bigger prizes by landing on the arrows. As with The Vault, collecting four coins will award a wheel spin into the Jackpot Flash/Super Jackpot Flash games or a cash prize.

Trigger this by landing three of the Game Flash symbol on an active payline and you’ll receive a random prize which could be a cash prize or entry into one of the bonus features listed above.

Bank Walt is another really well-designed slot from Magnet Gaming, a company who’ve certainly taken bonus features in a new and more involved direction; that’s good news as far as we’re concerned  and this game comes highly recommended. There’s an RTP of 96.50%.