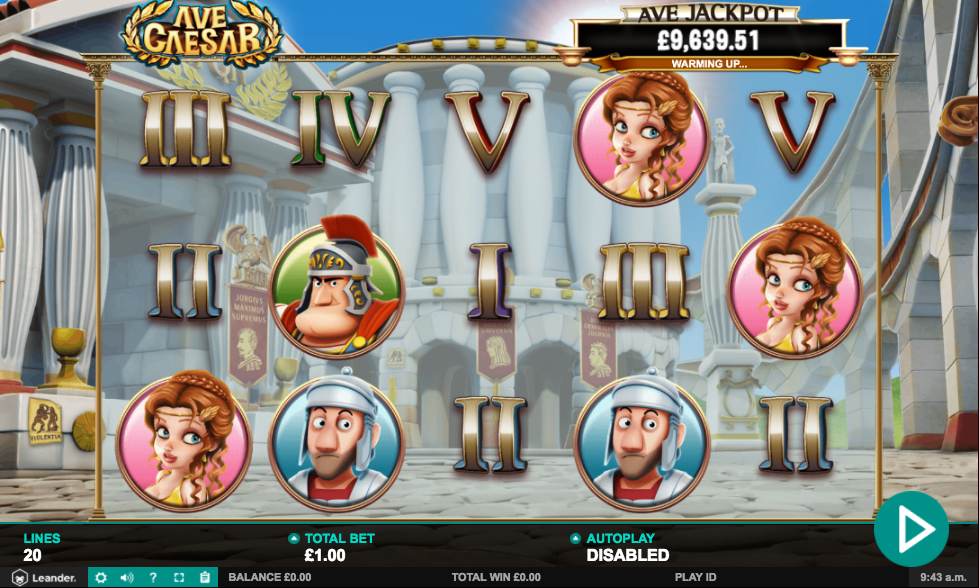 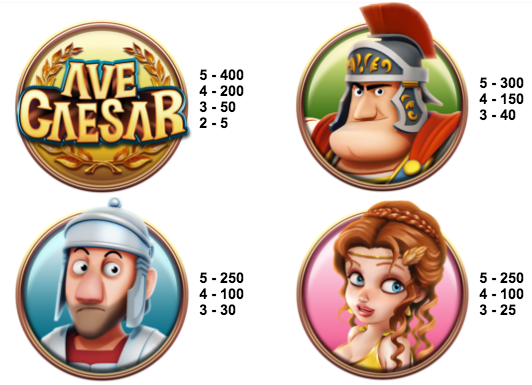 The mighty Roman empire may be long gone but it’s influence is still felt in various walks of life and obviously none more important than the online slot machine; here we have one more to demonstrate from Leander Games, it’s called Ave Caesar and it’s loaded with bonus features.

Ave Caesar is a five reel slot with three rows and twenty fixed paylines; a paved square filled with temples, administrative buildings and viaducts forms the backdrop to those ornate golden reels and in the top right hand corner the progressive jackpot ticks slowly upwards.

The four higher value symbols are the game’s logo, a legionnaire, a centurion and a brown-haired lady; appropriately I, II, III, IV and V represent the lower values.

Caesar himself is wild and he will substitute for all others to help form winning combinations except for the SPQR (Senatus Populus Que Romanus) bonus icon.

This is triggered by landing three bonus symbols on reels one, three and five although the one on the fifth reel is slightly different and determines which of four features are awarded:

There’s also a gamble feature after the bonus trigger in which you can try and shoot an arrow for a better result.

On any spin one of the following features can be randomly awarded:

This is won randomly on any spin but the higher your stake, the better chance of winning it. When it reaches a certain level it’s guaranteed to be awarded.

Ave Caesar is one of the most bonus-packed slots we’ve seen but there’s nothing too confusing here; there’s plenty of humour behind the gameplay as well and this is a game we’ve enjoyed playing, even if the RTP is a little low at 93.00%.