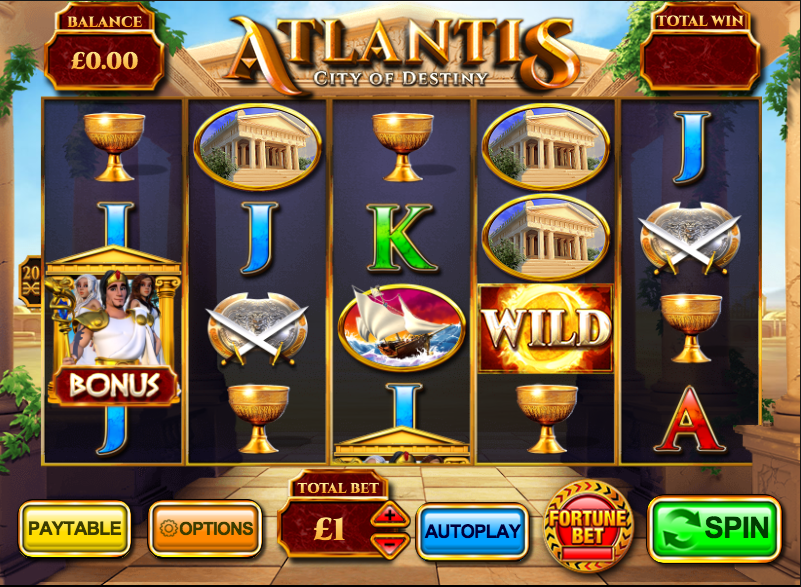 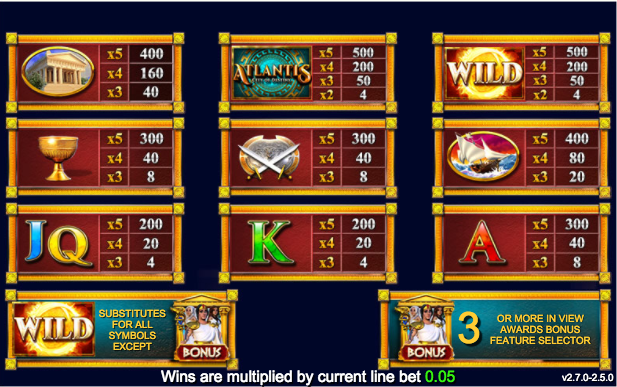 Online slots fans will be well aware that the fabled city of Atlantis is a story that conspiracy theorists won’t let die – or perhaps it’s real and lying at the bottom of a deep ocean somewhere. Either way we always welcome a game themed on this sort of thing and here we have Atlantis City Of Destiny, developed by Inspired Gaming and full of bonus features.

Atlantis City Of Destiny is a five reel slot with four rows and twenty fixed paylines; the action is set in Atlantis before the catastrophe with temples and piazzas under a clear blue sky.

The high value symbols include a large temple, the game’s logo, a golden cup, crossed swords and a ship; lower values are represented by the standard J, Q,. K and A.

The fireball is the wild symbol and is will replace all others in winning combos except for the male character bonus icon.

This is triggered by landing three of the bonus symbols anywhere on reels one, three and five; you will now get to roll a dice to determine one of three features:

The Lady of Atlantis may randomly award one of the following four features during any spin:

Press the ‘Fortune Bet’ button to increase your stake by 50% and increase the height of all bonus symbols by 2x.

Atlantis City Of Destiny is a bonus-tastic game with some smooth gameplay and a huge number of features to enjoy; it comes with an RTP of 95.00% and is certainly one to check out.