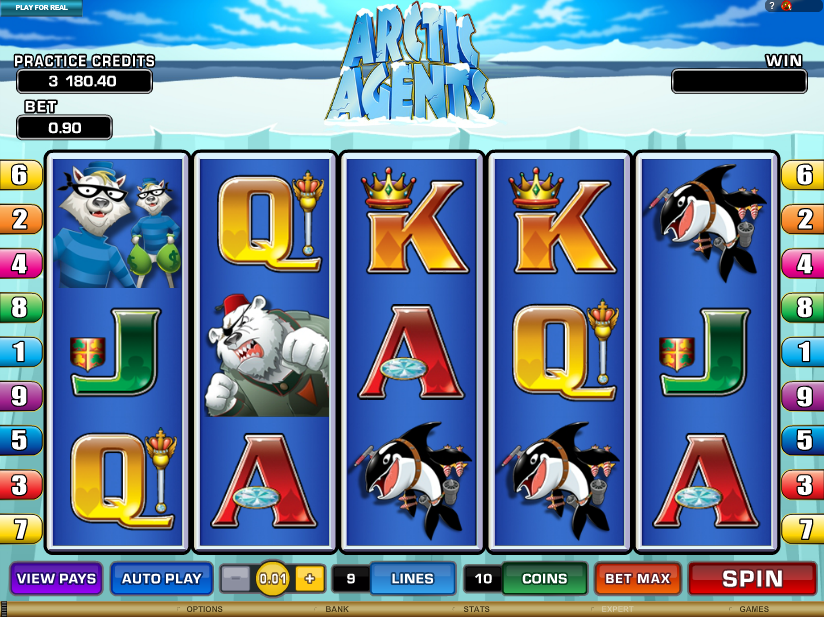 Snow, ice, secret agents and groovy animals – Arctic Agents is Microgaming‘s latest online slot and it features all those things in a fast-moving game which contains plenty of bonus features.

There’s an attractive simplicity about the gameplay in Arctic Agents and it’s a five reel and ten payline offering set against a backdrop of Arctic sky and ice.  A penguin with a pop-gun and a top secret briefcase is the main character in this adventure and he’s also the wild symbol.  Other symbols are represented by icy characters and include an arctic fox carrying bags of money, another pop-gun-wielding penguin, a fez-wearing polar bear and a shark loaded down with various weapons.  The scatter symbol is an ice pyramid headquarters and and the lower value symbols are represented by playing cards.

Landing three or more of the ice pyramid symbols anywhere on the reels will trigger the free spins bonus game and as you can see from the video clip below you’ll be whisked to a screen containing five characters and you’ll get the opportunity to pick one.  Each one will randomly reveal a certain number of free spins and a multiplier as follows:

All the bonuses are worth winning but it will take some luck to land a winning combination within three spins and we’ve won the greater sums with the most spins.

The ice pyramid becomes useful again while playing the bonus game and if you can land it on reels one and five you will be awarded a multiplier of between 2x and 50x your total wager.

Arctic Agents appeals because of it’s cute characters and variety of bonus games; the gameplay is fairly simple but the bonus games seem to get triggered pretty regularly and this machine has proved pretty profitable for us so far.