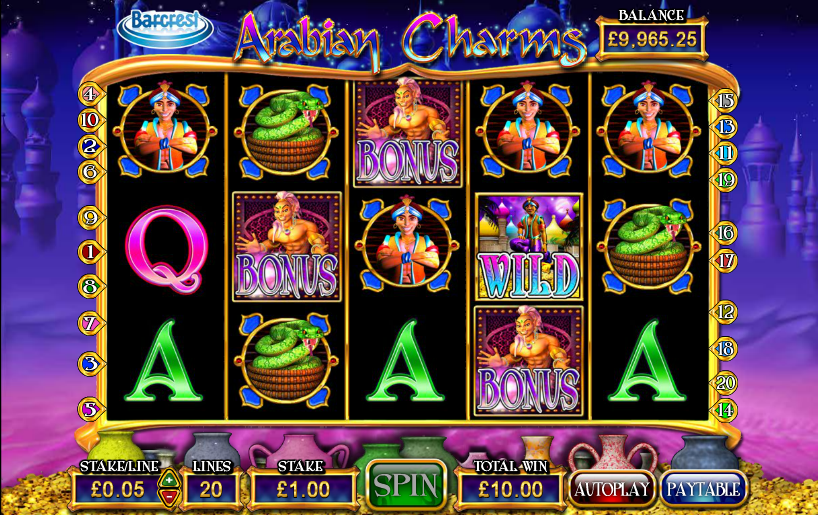 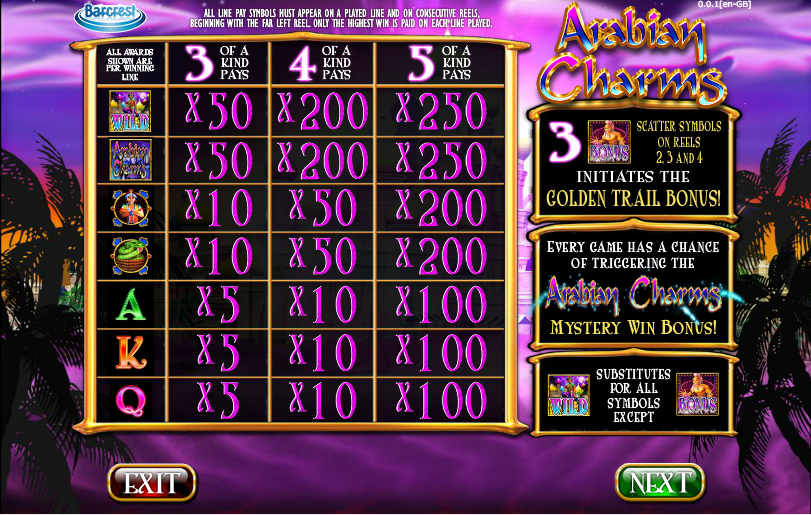 The ancient lands of Arabia offer plenty of scope for online slots developers, especially when fictional characters such as Sinbad are thrown into the mix; while that particular sailor may not appear in Arabian Charms there are plenty of other design features that will be familiar to fans of this genre. It’s developed by Barcrest and all the essential details are listed below.

Arabian Charms is a five reel slot with three rows and twenty fixed paylines; the glossy golden reels sit on top of a pile of coins and in the background there’s a hazy view of domed minarets and slimline towers. There’s a perky soundtrack to accompany your gameplay.

There are just three high value symbols and these comprise the game’s logo, the snake charmer and his coiled green snake; the standard Q, K and A make up the lower values.

The young lad (perhaps it is Sinbad?) represents the wild symbol and he will substitute for all others except the bonus icon – that’s some sort of genie character which activates the main feature.

This is triggered by landing three of the bonus symbols on reels two, three and four; it’s a board game and you must spin the wheel to move up it, earning increasing multiplier values along the way.

You keep spinning until you reach the big prize at the top or hit the ‘Collect’ segment on the wheel; landing a green segment will upgrade the trail so it becomes more valuable. 500x the total stake is the biggest prize available.

On each spin, whether winning or non-winning there’s a chance that blue orbs will descend on the reels, changing random symbols into matching ones. This will either create a winning combo or improve upon one you’re already landed.

This is the type of good-looking, smooth-playing slot which Barcrest does so well; the gameplay is addictive and the bonus features are imaginative. The RTP is 95.00%.