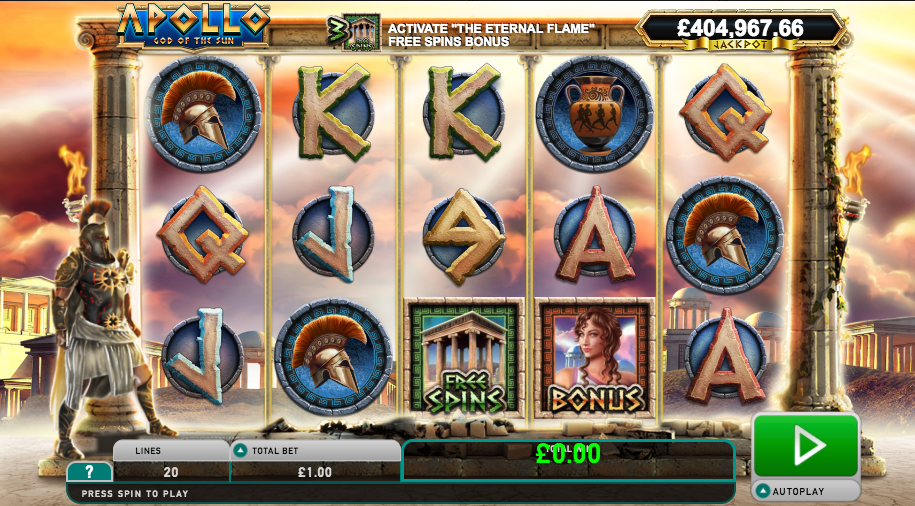 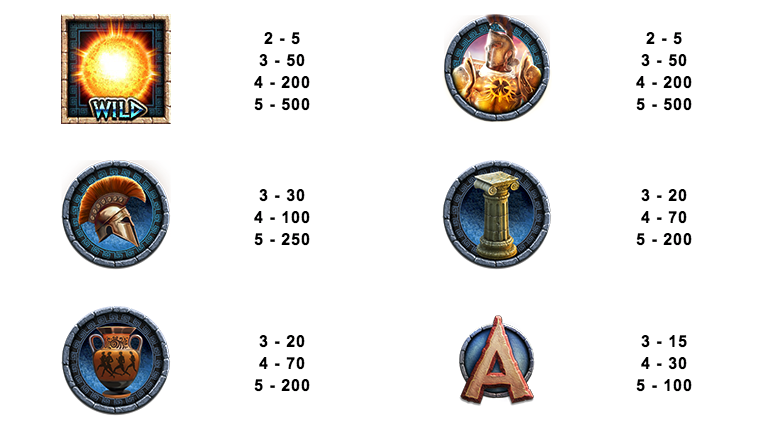 Apollo may have been the Greek and Roman god of the sun in keeping with the title of this online slot but he was also variously regarded asa god of music, poetry, healing, music and more. Based on this character is Apollo God of the Sun, a release developed by Leander Games with lots of bonus features and a progressive jackpot – read all about it here.

Apollo God of the Sun is a five reel slot with three rows and twenty fixed paylines; those reels spin between stone pillars and to the left hand side stands Apollo himself, poised for action.

The high value symbols include Apollo himself, his ornate helmet, a pillar and a vase; lower values are the standard 9, 10, J, Q, K and A.

The flaming sun is the wild symbol and it will replace all others to form winning combos except the muse and temple bonus icons.

This can occur randomly in any spin and Apollo will add columns of wilds to the reels which occupy all positions on the reels for some (hopefully) bigger ones.

This is triggered by landing three of the muse bonus symbols on reels two, three and four; now keep picking from the objects on display until you have filled up at least one musical instrument – prizes are awarded for each instrument completed.

Trigger this by landing three of the temple bonus symbols anywhere on reels one, three and five; you will now receive seven free spins and in each one the Almighty Sun feature will be active which should mean some decent payouts.

The jackpot can be won randomly at any time and by any player although those who play with bigger stakes have a better chance of grabbing the big bucks.

Apollo God of the Sun is a very entertaining slot with lots happening in terms of bonus features, some very nice graphics and of course the draw of a progressive jackpot; it comes with an RTP of 97.17%.