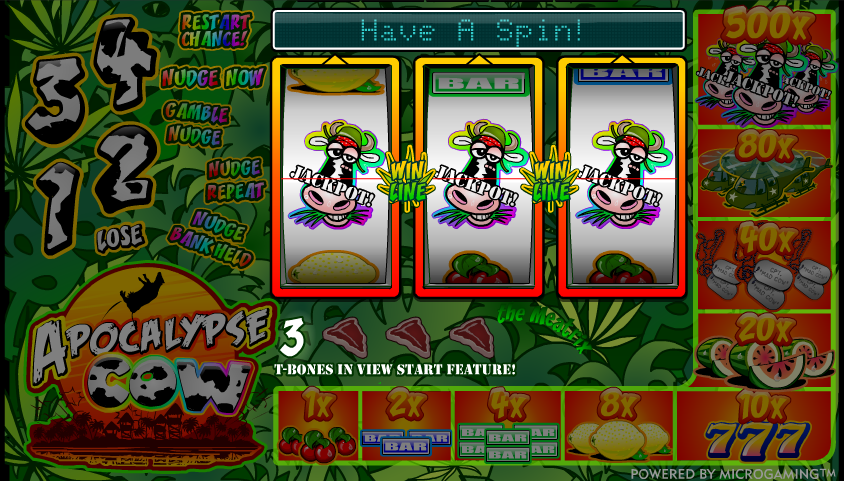 If you regard the seminal Vietnam film ‘Apocalypse Now’ as one of the greatest films ever made then you may or may not be pleased to hear that Microgaming have a fruit machine-style online slot called Apocalypse Cow. Not surprisingly it’s a slightly odd theme which contrasts the seriousness of war with a cheerful cow, Read on to find out more.

Apocalypse Cow is a three reel and single payline game set in the deep and impenetrable south east Asian jungle. The logo in the bottom left had corner is a great sunset view of a bamboo compound with the added extra of a cow flying over the top.

Cherries, bars, lemons, sevens and melons are the traditional low value symbols and they are accompanied by dog tags, helicopters and the cow as the higher values. Three does on the payline will win you 500x your stake.

This feature is a board game which is pretty easy to trigger but very hard to progress far on. There are t-bone steaks added to some of the symbols in the base game and if you can land three in view you’ll trigger this game.

Essentially you press the spin button and work your way round and round the board, collecting various features and bonuses. The trick is to collect the prize as soon as you’re happy with it because you won’t last long. Landing on the question mark squares is pretty much a ‘game over’ indicator so count yourself lucky if you service one.

You can win features, winning spins and multipliers but it’s tough to win the big bucks.

Nudges will be familiar to UK players and allow you to bump single reels down to make matched and collect t-bone steaks. They are awarded randomly and can be repeated, gambled and banked for one spin.

When the word Shifta is written in the sign above the reels, the game will rearrange the reels into a guaranteed win.

You will want so play the feature so use the nudges and holds with collecting t-bones in mind. When you eventually trigger the bonus don’t try and progress too far before collecting – you won’t get far.

We like these fruit-machine slots so will always rate them well but it’s a shame that the feature makes it so hard to get anywhere.