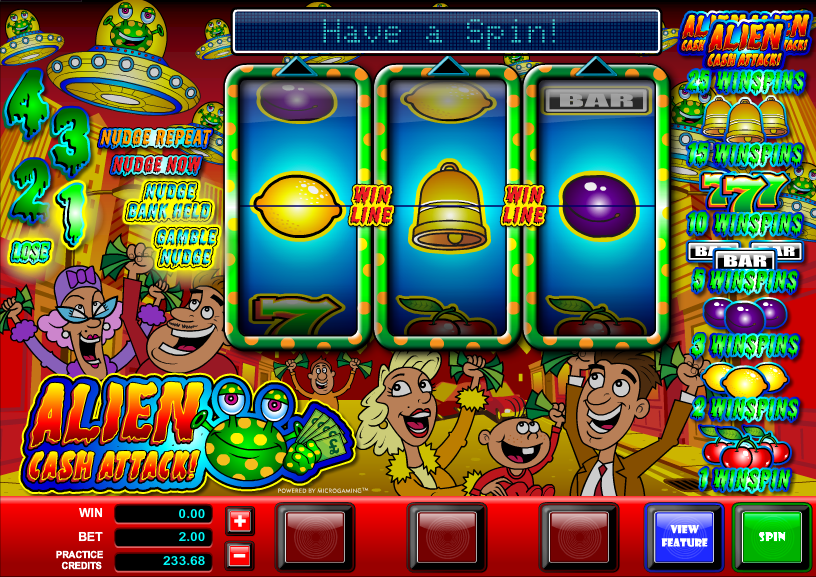 Nudges! Holds! On first glance this looks suspiciously like a pub-style fruit machine and on second glance that first glance is confirmed; Alien Cash Attack joins a number of online slots from Microgaming that generally follow the same format but are great fun nonetheless.

Alien Cash Attack has just three reels and one solitary payline but that doesn’t hamper the game’s entertainment value at all; it’s all about aliens and in the background cheerful creatures in UFOs spray money from their intergalactic vehicles.

The base game contains very few alien references and all the symbols are traditional ones such as cherries, lemons, plums, bars, sevens and bells. The biggest prize in the base game is the Alien Cash Attack symbol.

When playing the base game there are no cash prizes for creating winning combinations; instead each win will be worth a certain number of ‘winspins’. Cherries are the least valuable and worth one winspin while the Alien Cash Attack symbol is with the most at twenty five.

You and the winspins are then taken to a different set of reels which have three reels and five paylines and a guaranteed win on every spin. The spins start automatically and play through until completion, hopefully winning you plenty of money.

Fruit machine aficionados will be immediately familiar with the concept of nudges and holds and in this game they are awarded randomly. Nudges allow you to move single reels down a specified number in the hope of creating a wining combo; if you’re lucky they can also be repeated, gambled or held over to the next spin.

Holds give you the ability to freeze any of the reels and let the remaining ones spin; you will be given loads of these and it’s certainly not worth using them every time.

After a non-winning spin, the Shifta will be occasionally awarded – it will hold one of the reels and spin the other two to make a match.

If the little noticeboard above the reels says ‘Let ’em Spin’, ignore any temptation to hold the reels and press ‘Spin’ for a guaranteed win.

As we’ve already stated, use the holds wisely – you’ll be offered loads but it’s unnecessary to accept them. Cherries, lemons and perhaps plums are worth holding but not much else. Also keep an eye out for that ‘Let ’em Spin’ message above the reels.

We’re fans of these types of slots, probably because they remind us of the fruit machines in the corner of the pub; there’s always lots going on and it’s worth a go, even for those who usually shy away from three reel games.