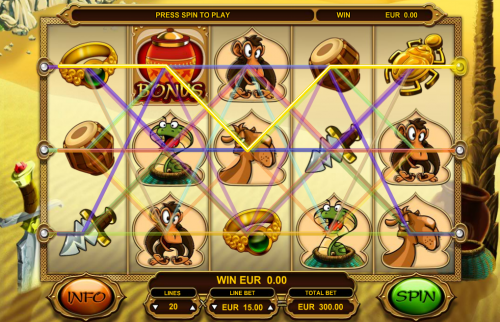 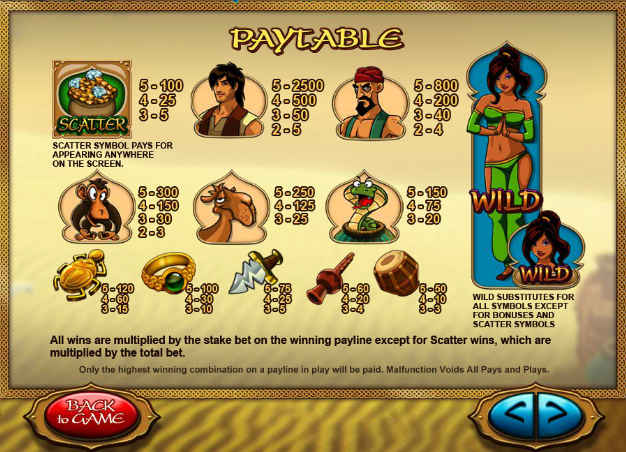 The tale of Ali Baba and the Forty Thieves is an old and well worn tale about the eponymous hero and his battles against a gang of thieves who store their loot in a cave which answers to the words ‘open sesame’.  This new slot machine from Leander Games is a worthy attempt to bring the legend to the virtual slot machine and it’s a fun and well-designed game with some nice graphics and atmospheric sound effects.

The backdrop to the game is a desert oasis and instead of the usual face card symbols we have a range of Arabian-themed pictures on the reels.  There is golden scarab beetle, a ring, a camel, a snake, a snake charmers pipe, a dagger, a drum, a monkey, Ali Baba and the Chief of the Thieves.  The wild symbol is a the sexy figure of slave girl Morgiana, the scatter symbol is a bag of gold and jewels and the bonus symbol is an urn.

When you land Morgiana anywhere on a reel she will expand to cover all the symbols on that particular reel.  This gives you extra chances to create winning combos whenever Morgiana does her foxy dance on the screen.  There are five reels and twenty paylines.

The Gold or Bandit bonus feature is triggered by spinning three of the bonus urns on reels two, three and four.  You will then be awarded between one and three Ali Protections.  No you can pick six vases from the ones in front of you for cash rewards.  An Ali Protection will give you an extra life if you pick a monkey instead of gold.

The Open Sesame Free Spins Bonus is triggered by landing the Free Spins symbol on reels one, three and five and you will then get the chance to pick your risk; there are three choices and they range from low risk, fewer spins and lower multipliers to high risk, more spins and higher multipliers.

Once you’ve decided on your risk tolerance you are presented with a screen containing a number of treasure chests; start picking your six chests to win spins and multipliers but if you overrun the preset limits you’ll be knocked back down to ten free spins and 1x multiplier.

This is well worth a diversion and you can bet as little as €0.01 for one spin on one payline or as much as €15.00 on twenty paylines, meaning a possible top stake of €300.00 per spin.  Spinning five Ali Babas will win you the maximum prize of 2500x your winning line stake.