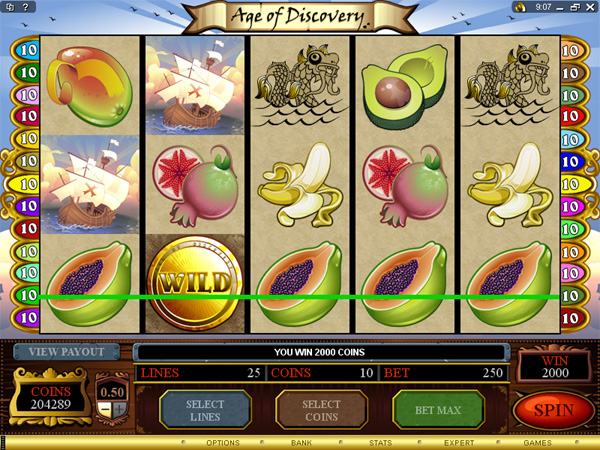 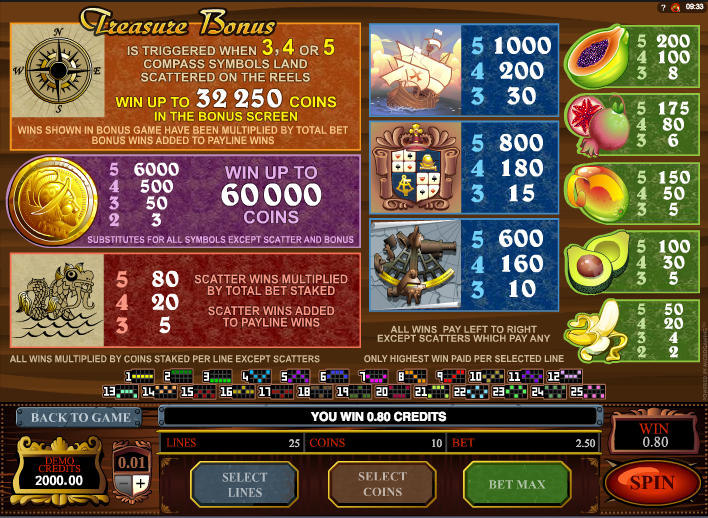 Age Of Discovery is an online slot machine from Microgaming which take us back in time to an era when life was arguably more exciting, particularly for those doing the discovering. It was a period dating from the 15th century to the 17th century and it describes the time when European explorers roamed the world’s seas and planted their nation’s flags on beaches everywhere.

Age Of Discovery features twenty five paylines spread out over five reels and of course the symbols are a range of items belonging to that age and those travels.  To start with we have exotic fruit such as bananas, avocados, mangos and star fruits and these are complemented by a sextant, a coat of arms and the explorer’s ship.

There’s only the bonus feature included in this game and to trigger it you’ll need to land three, four or five of the compass scatter symbols anywhere on the reels.

You will now be taken to a treasure map showing lots of little crosses (‘X’ marks the spot of course) and all you have to do is keep picking those crosses to reveal prize amounts.

There are also several skull and crossbones under the crosses and when you find one of these the round is over. You are awarded the total winnings but you will also receive a small prize which is shown when the log book on the left opens up.

If you’re going for the feature then you can play with as few paylines as you want – the scatter symbols which trigger it will be active anyway. The more lines you play, the more you’ll win proportionately though.

This is pretty standard fare which does look a little dated now but it seems fairly easy to trigger the bonus feature which is always good news. Leave the sound on for some nautical sound effects.