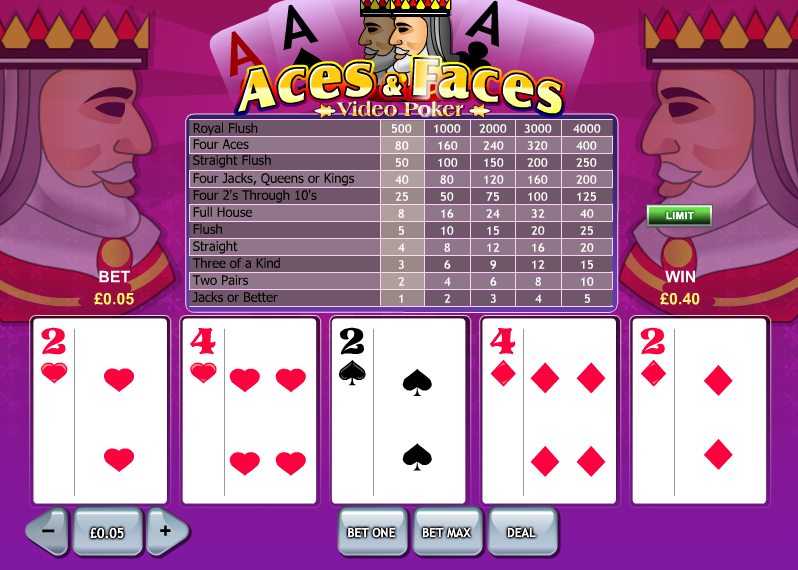 Despite how it may appear, video poker offers some of the best returns on your money available at online casinos. We like online slots as much as the next person but to eke a bit more playing time out of your bankroll it’s often a good idea to fire up a version of video poker.

This particular one is called Aces & Faces for reasons which shall soon become clear but it’s based on the Jacks Or Better format in which the lowest winning hand is a pair of Jacks. It’s graphically pretty basic as you can see from the screenshot above but if offers some extra winning options as well as an opportunity to double up your wins.

How To Play Aces & Faces

This versions is called Aces & Faces because extra winning combinations are added to the paytable; in fact the standard Four Of A Kind win which generally pays out at around 25/1 is split into the following groups:

This doesn’t make a win any more likely but it does pay out more on average than  standard Jacks Or Better game.

Start by selecting your stake in the bottom left hand corner and then choosing one of the five bet levels using the ‘Bet One’ or ‘Bet Max’ buttons. Now press ‘Deal’ to receive your first five cards then choose which ones you would like to hold before pressing ‘Deal’ a second time to replace your discarded cards.

If you’re lucky enough to win you can now try and double that amount by opting to challenge the dealer. He will draw a card and you must pick one of four others to find a higher card. Manage that and you will double your money.

This is a basic-looking slot but it does provide one of the highest RTPs of 99.00% if you play with maximum coins. The extra winning combos are largely cosmetic but do differentiate it from other video poker versions. Titan Casino offers 4 and 25 hand versions of this game. For optimal gameplay, check out our video poker strategy page.