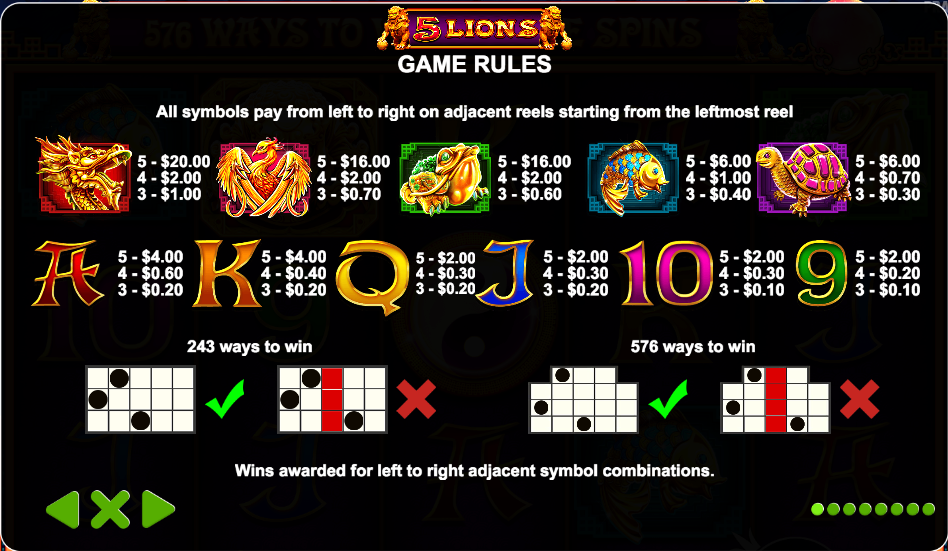 It’s time once more to head a long way east as we check out this online slot from Pragmatic Play themed on the legendary Fu Guardian Lions; it’s called 5 Lions and not only are they fearsome guards but they’re also apparently handy Feng Shui items for your home.

5 Lions is a five reel slot with three rows and two hundred and forty three ways to win; a delicate, ornate golden frame borders the action and there’s a slowly rotating pink globe in the top right hand corner to add to the effect.

The five high value symbols include the dragon, the phoenix, the frog, the Koi and the turtle; 9, 10, J, Q, K and A make up the lower values.

The golden lion is wild, he appears only on reels two, three and four and he will substitute for all others to help form winning combos except for the Yin Yang bonus symbol. The wild will also apply a random multiplier of up to 40x if it contributes to a win.

This is triggered by landing three or more of the Yin Yang bonus symbols on adjacent reels starting from the left hand side and you’ll initially be prompted to select from one of the following seven free spins options:

More spins can be triggered by landing three or more Yin Yangs during this round and on each retrigger you’ll get to choose from the above options again. Reels three, four and five also gain an extra row during this round so the paylines increase to 576.

If a slot can be simple but effective and entertaining then 5 Lions is a good example of how it’s done; some smooth gameplay and animation, an appropriately Chinese soundtrack and an enhanced free spins round will keep calling you back for more. This game comes with an RTP of 96.50%.