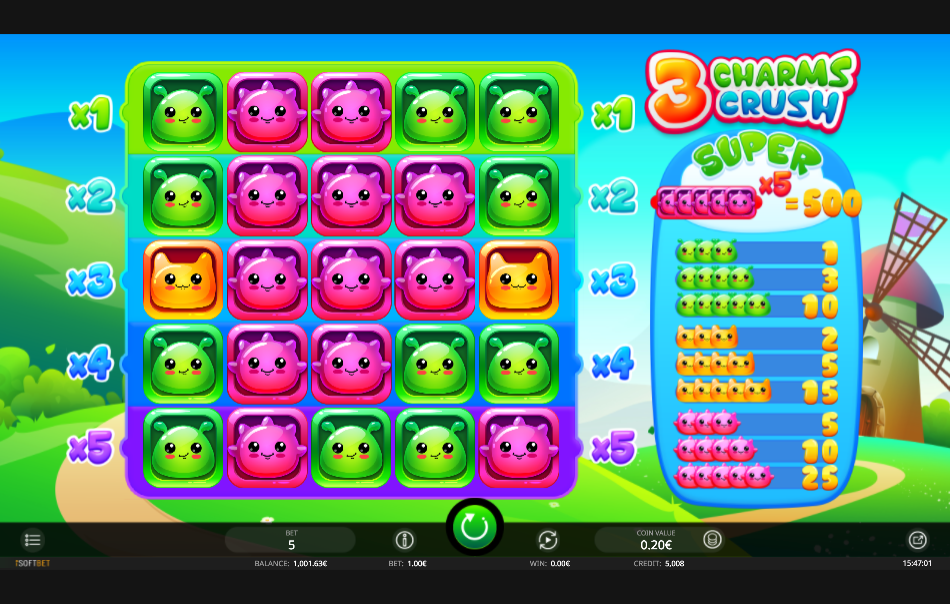 If you’re looking for a cheery dose of colour and cuteness to brighten up a boring afternoon then we may have just the online slot for you; 2 Charms Crush is a release from iSoftBet with plenty of vibrancy but not too many bonus features – read how it all works below.

3 Charms Crush is a five reel slot with five rows and just five paylines; the multicolour reel set is set against a backdrop of rural idealism with rolling hills and and a gently turning windmill under a clear blue sky. It looks like a could be an arcade game rather than a slot but don’t worry, it’s the latter.

To keep things simple there are only three symbols in play here – the purple thing with spiky hair, the yellow squarish thing and the green blob with skinny ears.

There are no wilds or special symbols in 3 Charms Crush and there are no bonus features really but there’s a multiplier in play at all times and this is explained in a bit more detail below.

There are five rows in this game and each is one straight payline; on the left of the rows is a multiplier value which will be applied to any win occuring on that particular payline. For

example a set of three green characters on row four is worth a win one coin but this is then multiplied by 4x.

The one exception to this is a combo win of five purple things on row five which will be multiplied by 20x, resulting in a 500 coin ‘Super Win’.

A lack of bonus features doesn’t detract too much from the charm (pun intended) of this slot machine; just set the Autoplay for your your desired number and watch the cute little characters do their thing. There’s a refreshingly high RTP of 97.23%.