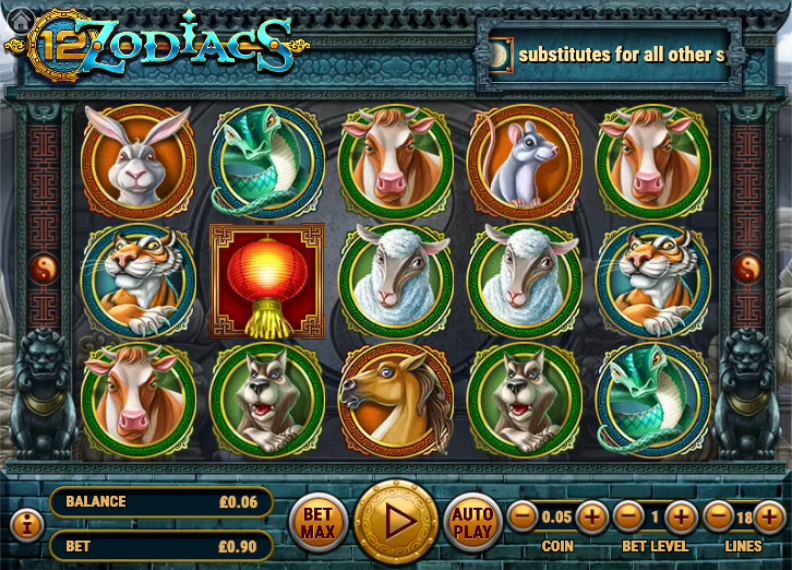 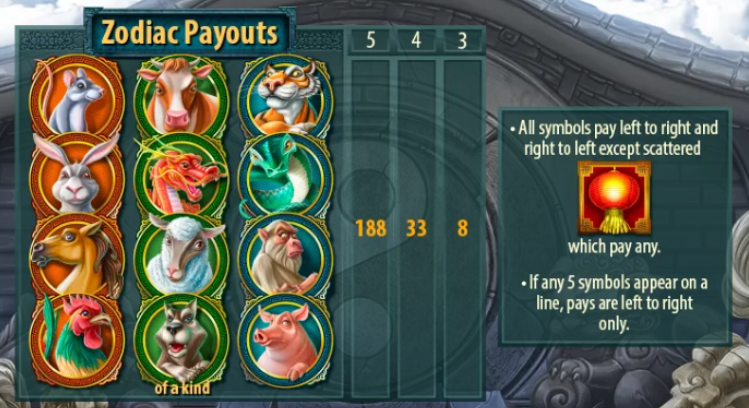 We all know that the Chinese zodiac features twelve animals corresponding to various years and most of us know which is our animal depending on the year we were born (dog, if you’re asking); now we can add to this knowledge by playing and online slot from Habanero called 12 Zodiacs which features free spins and plenty of scatter payouts.

12 Zodiacs is a five reel slot with three rows and up to eighteen paylines; there’s a gentle, oriental soundtrack to your gameplay which takes place on the side of a large, grey temple.

The symbols are of course the twelve animals which make up the zodiac – ox, tiger, rabbit, dragon, snake, horse, goat, monkey, rooster, dog, pig and rat – and winning combos can be formed from right to left as well as from left to right.

The moon is wild and it will replace all animals to help form winning combos – it can also glow red for the luckier players and multiply winnings; the Chinese lantern is the scatter symbols which activates the main feature.

This is triggered by landing at least three of the Chinese lanterns anywhere in view for which you will be awarded six free spins; that may not sound like many, especially as the feature can’t be retriggered but during the spins if there are at least three matching symbols anywhere in view they’ll all turn into scatter symbols and pay out accordingly.

There’s some impressive detail in the graphics and animation of 12 Zodiacs and it’s a game we’ve enjoyed playing, especially when the free spins kicks in; the soundtrack is a perfect accompniment to the spinning reels. Highly recommended.